- Hamilton allegedly made sexually harassing comments in a Hearing to a female State Rep. when he asked State Rep. Marisa Marquez if her mountains “breasts?” were real or man-made.
- Mike Hamilton Tax Liens for not paying Taxes (thousands of dollars)
- Mike Hamilton Ethics Commission Judgments and thousands of dollars in fines for misuse of funds
- Complaints for using campaign funds to pay for luxury hotels in California and lunch “meetings” at Hooters
- Mike Hamilton NEW Ethics Violations for not reporting money and illegal billboards
- Hamilton demeans fellow Lawmakers by referring to the ones he does not like as “Boys” and “Young Ladies” instead of calling them by name or title
- Mike Hamilton has used his Taxpayer funded State Capitol office as the location to have beer parties for young interns and lobbyists. He calls it “Tuffy Tuesdays”
- Allegations that Mike Hamilton turned down an offer to be on the important Appropriations Committee because it would be “too much work” even though it would have been beneficial to his constituents

The Gloves have Come off in HD19 State Rep Election: Mike Hamilton Getting Desperate in race VS. Super Conservative James White
These factual documents revealing Mike Hamilton’s vast number of ethics problems were sent to Texas Conservative Republican News this weekend following Mike Hamilton’s campaign falsely stating that James White had resigned from his teaching job due to complaints. The media that originally reported this allegation from Hamilton had to correct their articles after it was revealed that Hamilton lied. The truth is that James White was not only given a contract extension, but he was also given stellar year-end reviews. James White only resigned from Livingston ISD after he was offered a teaching job at Woodville ISD because WISD is much closer to his home in east Texas than LISD. James White did have a complaint against him for including the Supreme Court Texas Sodomy Case in his 12th grade class discussion of important Supreme Court Decisions. The investigation that was closed quickly and James White went on to get stellar reviews and a contract extension.

This is not the first time Hamilton’s campaign has been caught lying. One flyer that Hamilton sent out said that the Baker institute ranked White as the second most liberal after every session White has been in. This was blatantly false. White has only been in ONE session and the final 2011 session Baker Institute had White ranked as a top Conservative and Mike Hamilton as being one of the bottom ranking Republican conservatives. It was Hamilton who was actually ranked as the second most liberal republican by the Baker institute following the 2009 session. Texans for Fiscal Responsibility rated Tuffy only C+ fiscal conservative. Texas Eagle Forum gave him a 32% social conservative score. Young Conservatives of Texas gave him a 65% score. James White got a 92% Social Conservative Rating from Texas Eagle Forum after the 2011 session and White got an A+ Fiscal Conservative Rating from Texans for Fiscal Responsibility after the 2011 session. In that same flyer, Hamilton says that White moved into the district to run for office. The truth is that White has been in East Texas for nearly a decade. Two years ago White stepped up and ran and beat longtime Democrat State Rep Jim McReynolds. White has been in office for one term and after redistricting, Hardin County was put into his district. Mike Hamilton lost Hardin County after redistricting. Mike Hamilton moved to Hardin County only a FEW MONTHS ago to run against James White. Hamilton is the one who moved to run for office, not James White.

Hamilton also lied to his constituents by directly telling his conservative voters that he killed a casino gambling bill when Hamilton was actually the person who wrote the bill and did everything he could to pass the bill. The bill dies when Hamilton did not get the votes to move forward.
Mike Hamilton cannot combat his low conservative voting record, liberal votes and multiple ethics violation judgments compared to James White’s super conservative rankings and record, so Hamilton is attempting to confuse and distract voters.

Voters are not happy about all this deception. The KBTV Fox 4 recently reported the outrage from the Southeast Texas Tea Party after Hamilton backed out of a Tea Party debate only days before the debate was to take place. I guess Hamilton did not want to have to face the tough questions he would face in a debate with super conservative James White.

Tax Lien Documents
These two documents show that Hamilton did not pay his taxes and the State had to levy multiple tax liens against Hamilton for thousands of dollars. 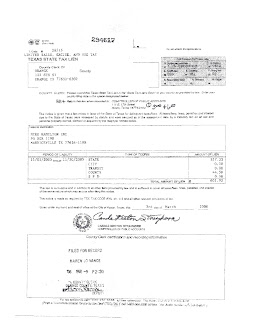 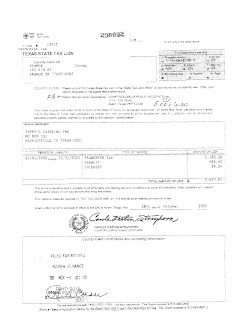 Alleged Sexual Harassment Comment Documents
Attached is an El Paso Times News article. This article was sent to me as evidence to an alleged sexually harassing comment towards State Representative Marisa Marquez. This article details a hearing about funds for the Franklin Mountains in El Paso. The hearing was quick because the committee already knew they wanted to table it. Mike Hamilton did have only one question for Democrat Rep. Marisa Marquez before they tabled the amendment. Hamilton asked her if her mountains are real or man-made. Why would Mike Hamilton ask if these nearly 8,000 foot high mountains that surround El Paso are “real or man-made?” Hamilton is not stupid enough to think the Franklin Mountains are man-made…. He might be stupid enough to joke around and take a inside-joke shot at this Rep. by asking if HER “mountains” are real or not…

Hamilton also only referred to this fellow State Rep. Marisa Marquez as young lady instead of her name or title. This is the same demeaning attitude he has towards State Rep James White. Hamilton commonly fails to call James White by his name and instead refers to White as “boy”. Well Mr. Hamilton, that “boy” James White is no boy. He was a Captain in the Army serving under President Reagan and was even in Berlin when the wall came down. 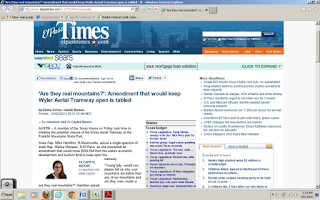 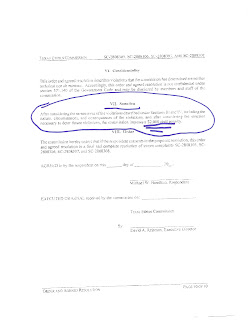 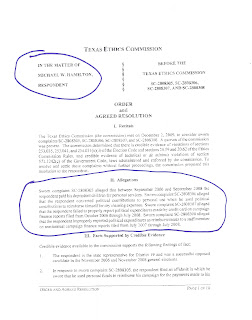 Campaign Finance Report Documents Show Misuse of Money
These documents show where Mike Hamilton used his campaign funds to stay at a Luxury Resort in California and also to have a “lunch meeting” at Hooters, a place known for waitresses in tight shirts and short shorts. 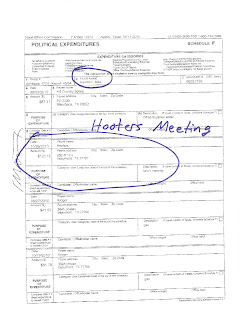 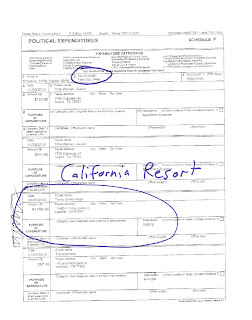 Pictures and Documents of NEW Ethics Violations
Mike Hamilton is facing new Texas Ethics Violations and possible fines for putting up several deceptive and illegal billboards up and also for not reporting campaign funds and expenditures. The billboards (see picture) clearly do not have the required disclaimer that this was a political advertisement. Hamilton just wanted everyone in James White’s district to think that this was not a political ad and Hamilton was just going to assume the position of being THEIR new State Rep. Also, the campaign finance reports for “Friends of Mike Hamilton” have $0 listed as Contributions and $0 listed as expenditures. This Hamilton PAC has been listed as the one paying for Hamilton’s website, all of Hamilton’s campaign mailers and tv attack ads. The Texas Ethics Commission Website shows that several other Political Action Committees have reported given thousands of dollars to friends of Mike Hamilton. Why has Hamilton’s group only reported ZERO dollars for contributions and expenditures? 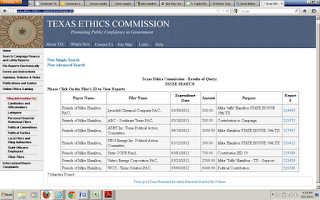 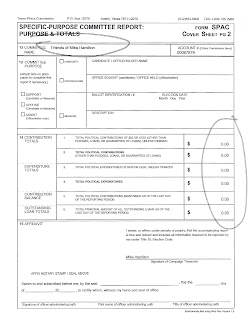 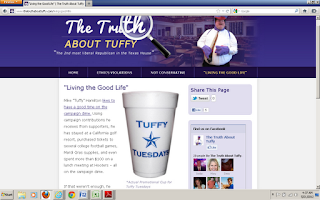 Posted by David Bellow Posted at 4:42 AM