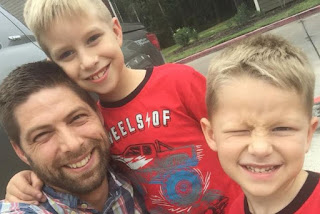 I recently helped file a Petition for Writ of Habeas Corpus before the Supreme Court of Texas regarding the egregious constitutional violations of Judge Patrice McDonald in Montgomery County, Texas. Hopefully the SCOTX will stand up for the Constitution and Free Joshua Jaros. Specifically, Judge McDonald refused to allow Joshua Jaros to have an attorney in a criminal proceeding, and then threw him in jail for a debt that he could not afford and without the chance to have an attorney to represent him and present his case as the Constitution requires.

If the name Judge Patrice McDonald sounds familiar, it is because she has been in the headlines recently by Investigative Reporter Wayne Dolcefino. Wayne has been exposing Judge McDonald after she threatened to throw a man in jail for not paying for an attorney and for spousal support for his bigamist ex in a divorce proceeding.

The man, Mark Athans, filed for divorce after he found out his wife of 5 months was already married. The woman was a fraudster and charged with Felony Bigamy. The marriage between Mark and woman was voided in the state in which it occurred. That didn’t stop Judge McDonald though who proceeded with the divorce case and refused to consider that there is no marriage due to the fraud and felony behavior of Mark’s ex, and even was going to jail the victim Mark if he did not pay his con artist ex’s attorney fees.

The latest victim of Judge McDonald is Joshua Jaros, who now sits in jail after having his Constitutional rights tossed out the window. The situation with Josh Jaros reveals a bigger issue with the horrible family law system in Texas in which good parents, mostly fathers, get separated from their children which causes a ripple effect of harm to the children and society as a whole. Reducing incentive for parents to fight over children should be a priority in Texas. Equal Shared Parenting laws overwhelmingly and on a bi partisan basis passed out of the Texas House this past session but never made it to the floor. Children should be able to have access and love from both fit parents, and parents should not have incentive to fight with their children’s lives and instead have to practice equal shared parenting. This would reduce the factual devastating effects on children that this fighting and parental alienation causes because parents will be forced to share costs and parenting instead of parents using their children as pawns to get a little more parenting time to hurt their ex or to be able to get more child support or be awarded legal fees for their lawyers.

Josh Jaros was jailed in Montgomery County Texas after he received no jury trial and after he was denied an attorney which is a basic constitutional right and is even Texas Law. There were other issues as well such as fatal flaws in the notice and pleadings. Josh Jaros is a great father who supports and takes care of his kids but could not pay the several hundred dollars a month to his ex-wife each month after Josh already pays to take care of his kids half the time and provides a roof over their head and food for them to eat etc. Both parents should always be able to equally be with their children if there is no threat of harm or violence etc, and supporting children in Texas means both parents taking care of the children equally. Texas needs to pass equal shared parenting laws so that children get to have both of their parents in their lives, and it would exponentially cut down on the fighting and tearing apart and bankrupting of families in the court system of fit parent had no choice but to share their child equally instead of being able to go to court and fight for more time or more money. #FreeJoshJaros

The Texas and US Constitutions require that any criminal defendant has a right to an attorney and even the right to have one appointed for them if they are unable to afford one. Seems pretty straight forward right? Unfortunately, the Court systems in Texas (and in the Nation) do not always follow the Constitution and are in need of serious reform. The Constitutional rights we all hold dear frequently get tossed out the window in courtrooms where judges can virtually do whatever they want with immunity. There are many good and great Judges who follow the law and the Constitution, but there are also Judges who do not. There is very little oversight when clear laws and rules are violated by judges. There is even less method of reprimanding a Judge, and even less of an adequate way to reverse a Judge who clearly violates the law or the Constitution. If the Law or the Constitution says a Judge has to do something specific, and the judge simply refuses, then what recourse does someone have? Just because the law says it MUST be done does not mean a judge has to follow it because there is NO reason for them to. They won’t be disciplined. They MIGHT be overturned if you can get an appeals court to take interest in the case but that could take years on appeal. Mandamus is the appropriate form of demanding that a Judge follow the law or constitution when it is clear they have not during the pendency of a case, but mandamus is rarely taken up even if the judge is completely wrong because the appeals court does not have to take them up and can just say they don’t have time to rule on the mandamus. Texas must create a better system of immediate and mandatory review when there is a question of whether or not a judge in a case is not following a clear and mandatory law or rule that must be followed. People’s lives and time and money should not have to wait for years of appeals to overturn a bad judge when there is a clear violation of law or rule by a judge. The clear violation by a judge should be resolved quickly so the underlying case moves forward and gets resolved in a fair and unbiased manner. Judges should be more strictly required to follow mandatory laws and procedures or face real consequences. As it stands now, Judges have no incentive to actually follow mandatory requirements if they know they will not get in trouble.
Posted by David Bellow Posted at 6:00 PM 1 comment:

Rallies, Boycotts and Protests are just part of the reaction waiting for George Lopez when he comes to Beaumont, TX tomorrow 1/10/2020. This is in response to George Lopez having tweeted that he would assassinate President Trump for half the bounty that Iran was offering. Also, does the Constitution protect this kind of speech? Yes and No.
Following President Trump’s military operation to take out Iranian terrorist Qasem Soleimani, who was responsible for the deaths of hundreds of Americans, Comedian/Actor George Lopez responded on twitter in reference to the bounty put on United States of America President Donald J. Trump. The response from George Lopez was “We’ll do it for half.” see picture of tweet below
George Lopez promoting, agreeing and accepting an offer to kill the President of the United States is appalling and possibly criminal, and the backlash to George Lopez was swift. In fact, as fate would have it, George Lopez has a show this Friday night right here in southeast Texas. In the past couple of days, local news feeds have been flooded with local businesses and residents calling for a boycott of the show. Screenshots of all of these reactions and planned rallies and boycotts are posted below. One local businessman Rustin Guarnere posted on facebook that he is offering $2000 off any new home plus $2500 in furniture for anyone buying a new home who brings him their George Lopez ticket. Judy Nichols, the chair of the Republican Party of Jefferson County Texas, released a statement responding to the George Lopez event. She is also organizing a rally to support President Trump just outside the George Lopez event. Another local businesswoman, MrsMobile Home Magan, posted on facebook for anyone who bought a home from her and gives her their tickets then she will give them double what they paid for the ticket so she can burn the ticket. Another local resident posted screenshots of the seats available and it shows there are more seats available now than 3 days ago due to people apparently canceling of returning their tickets. Screenshots of local news coverage of the reactions and planned protests are also attached below.
I am a big advocate of the Constitution, including the First Amendment right to freedom of speech. That only protects from government restriction of speech. That does not mean there will not be consequences for speech such as rallies or boycotts form people who have differing opinions and want to express their contrary beliefs. The First Amendment should protect anyone from criminal prosecution as well for freedom of speech. There is a limit though as the First Amendment does not protect against some kinds of threats. While studying at Texas A&M University in College Station, TX, I had a constitutional law class as part of my political science degree course load. The professor made an example for us of what is protected and what is not. It would be perfectly legal and constitutional for George Lopez to say someone should take up the bounty. It would be perfectly legal and constitutional for George Lopez to say someone should kill the president. He would not be specifically directing anyone to go kill the president and he isn’t saying he is going to go do it himself as a specific and direct threat. He is expressing a horrible opinion that he will get backlash or even civil lawsuits for, but is non the less constitutional as anyone in America has a right to express their opinions without government restriction saying they cannot. However, George Lopez seems to have gone beyond saying someone should take up the bounty against President Trump. George Lopez specifically stated he would take up the bounty and only wants half the money. That certainly on its face appears to be a specific threat and agreement to kill the president for a price. George Lopez at the very least should get questioned and investigated to ensure there is no threat from him, and he might should be charged as well. I am a big fan of criminal justice reform and a big supporter of the constitution. We have a lot or problems with unconstitutional laws and prosecutorial misconduct and over regulation. I’m not saying he should be thrown in jail and throw away the key, and I even believe that many laws restricting speech are unconstitutional as everyone has a right to say whatever opinion they want. But George Lopez might have crossed that line of opinion by stating that he was taking up a bounty to go through with an assassination of the President. At minimum, his speech does have non-governmental consequences which are now being seen right here in southeast Texas. 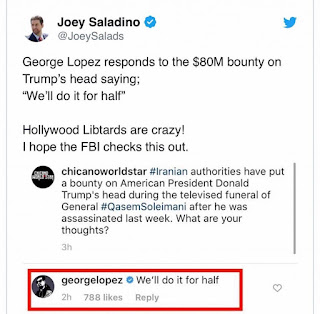