Update: the kids at West Hardin ISD were told that they will not be punished unless it happens again. They were told that it is ILLEGAL! If that is the case then are cross necklaces banned too? What about personal Christian bracelets? this is ridiculous. I don't think the people running these schools are bad or non-Christian, but they just do not know the law nor do they know the religious  rights we have in America. 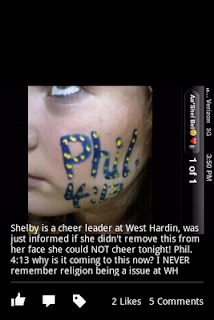 Just a few hours after Judge Steve Thomas allowed students at Kountze ISD to hold signs at football games with religious messages by ordering a restraining order against the school, a student in a different school just a few miles down the road is facing punishment by her school for having a Bible Verse painted on her face at a football game. Shelby Lafour goes to West Hardin ISD. Cindy Lafour, Shelby's mother, has always encouraged her kids to stand up for what they believe. Cindy's daughter Shelby, a West Hardin ISD Cheerleader, took it upon herself to write a verse on her face at the Football game tonight (Thursday Sept 20th, 2012). West Hardin ISD did not like the verse on Shelby's face and Cindy says that Shelby's cheer coach told Shelby that she could not have "Phil 4:13" painted on her face. The cheer coach explained that it was not her decision to ban the Bible Verse face paint. The cheer coach said the orders came from the West Hardin ISD Administration/Management. 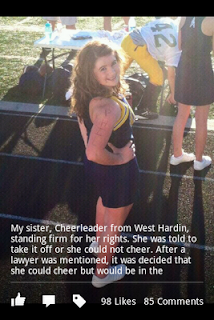 Shelby was ordered to take off the paint or she could not cheer. After Shelby questioned why she could not wear the paint, she was told that she could keep it on but she must report to the Principal's office in the morning to be reprimanded/disciplined.

Is there something in the water over here? What are the chances that something like this happens at two different schools in the same county in the same week in ultra Christian, conservative, East Texas?

Stay Tuned for more details on both the Kountze situation and this new situation in West Hardin.

West Hardin ISD is comprised of students from the small East Texas cities of Batson, Saratoga, Thicket and Votaw.


Also, remember the big "Support Kountze Kids Faith" rally planned for the next Kountze Home Football Game Oct 5th, 2012. We will have signs and t-shirts supporting these constitutional religious rights of these students.

Posted by David Bellow Posted at 2:08 AM