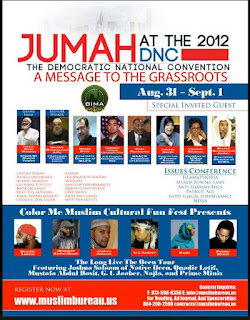 The Obama Campaign will sponsor an Islamic Jumah at the DNC in September. Obama’s DNC lists the assembly as an “official function.”

Robert Spencer wrote this about the DNC Jumah:


But the most disturbing aspect of the entire “Jumah at the DNC” is not the obvious victimhood-mongering of its agenda, but the people involved. The Democrats are playing host to an unsavory gang of Islamic supremacists with numerous ties to jihad groups. Even this is not surprising, but it should be a matter of concern to any Americans who are more aware of the jihad threat than the average politically correct Democrat pol.

But, as Atlas Shrugs pointed out, the Obama Campaign denied Catholic Cardinal request to lead prayer at the convention.


President Obama turned down a chance to have Timothy Cardinal Dolan deliver a prayer at the Democratic National Convention after Dolan told Democrats he would be “grateful” to deliver a blessing in Charlotte.
Dolan — considered the top Catholic official in the nation, as head of the Archdiocese of New York and president of the Conference of Catholic Bishops — tipped off Democrats a few weeks ago that he had agreed to deliver the prime-time benediction at the Republican convention in Tampa next week, Dolan’s spokesman Joseph Zwilling told The Post.

This Jumah Group is being represented by Siraj Wahhaj, who will be the “Grand Imam” for the gathering.”
Here's what the Washington Times reports about Radical Imam Siraj Wahhaj:

At a solidarity speech in 1995, Wahhaj informed the world that it was his “duty and our duty as Muslims to replace the U.S. Constitution with the Quran.”

On another occasion Wahhaj commented, “if only Muslims were clever politically, they could take over the United States and replace its constitutional government with a caliphate.”
At another time he warned the United States that it is doomed to fall unless it “accepts the Islamic agenda.”

And finally, this: “You know what this country (USA) is? It’s a garbage can. It’s filthy.”

Moderate? You be the judge. And his appearance in Charlotte is endorsed by the DNC.

What is so disheartening about the so-called “Jumah at the DNC” is that it has thus far gone unnoticed or ignored by the mainstream press.
Posted by David Bellow Posted at 4:09 PM