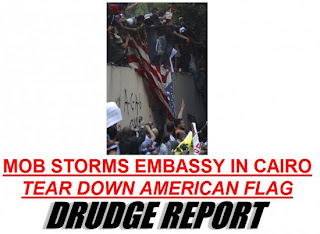 President Obama has disgraced the office of the Presidency. His sympathetic reaction to the Muslims attacking our embassies and also his non-action to immediately secure and protect the embassies and demand justice are a slap in the face to all Americans on the anniversary of September 11, 2001. Did I also mention that we helped and supported these countries attain freedom from dictators? They hate us, why should we help them and send them money? Why should we remove one dictator just to replace him with terrorist Muslims who hate America?

On the anniversary of the 9/11 terrorists attacks, Muslims in Egypt and Libya attacked our U.S. Embassies killing 4 Americans, including U.S. Ambassador to Libya, John Christopher Stevens, who was killed in the Benghazi Libya attack. These Muslims were mad that Americans have freedom of speech and one American made a video trying to disprove Allah and Muhammad. This video hurt their feelings so the Muslims killed Americans.

In response, Mitt Romney strongly condemned the attacks with no strings attached or justification given for the attacks.

First of all, Obama disrespected our constitutional right to freedom of speech. Second, he seemed to make it seem that he understood and sympathized with the Muslim murders because, well, the Muslims only murdered because they got their feelings hurt. I suppose Obama thinks that we should not have the freedom of speech if it hurts someone's feelings. Third, these are murderers! We should strongly condemn them and swiftly act to stop them and bring them to justice and let them know that this is not tolerated. Fourth, Obama is being hypocritical and favoring the Muslim religion. Obama says it is not nice to talk bad about the Muslim religion but Obama and his Democrat Party disrespect Christianity ALL the time. Also, these Muslims don't want to hear bad stuff about Allah of Muhammad but they turn around and talk trash about and disrespect Christianity. Why hasn't Obama condemned Muslims or Democrats using speech to talk bad about Christianity? It is a hypocritical double standard. This flawed ideology is spreading to America too. Atheists and Liberals are constantly complaining and filing lawsuits against Christians because the Atheists and liberals have hurt feelings over Christian businesses or Historical symbols like the 9/11 memorial cross left standing after the 9/11 terrorist attacks (which the atheists want torn down).


According to The Blaze, this is how the U.S. Embassy in Cairo Egypt responded:

How did the U.S. embassy respond? By apologizing to the rioters for hurting “their religious feelings“:


"The Embassy of the United States in Cairo condemns the continuing efforts by misguided individuals to hurt the religious feelings of Muslims — as we condemn efforts to offend believers of all religions. Today, the 11th anniversary of the September 11, 2001 terrorist attacks on the United States, Americans are honoring our patriots and those who serve our nation as the fitting response to the enemies of democracy. Respect for religious beliefs is a cornerstone of American democracy. We firmly reject the actions by those who abuse the universal right of free speech to hurt the religious beliefs of others"

According to WSJ, Mitt Romney has made this Statement about the Attacks:

"America will not tolerate attacks against our citizens and against our embassies. We'll defend, also, our constitutional rights of speech and assembly and religion.'' "Apology for America's values is never the right course."


According to JSBRADIO, this was the Statement from President Barack Obama that has made so many people mad:

"I have directed my Administration to provide all necessary resources to support the security of our personnel in Libya, and to increase security at our diplomatic posts around the globe. While the United States rejects efforts to denigrate the religious beliefs of others, we must all unequivocally oppose the kind of senseless violence that took the lives of these public servants."
Posted by David Bellow Posted at 10:54 AM