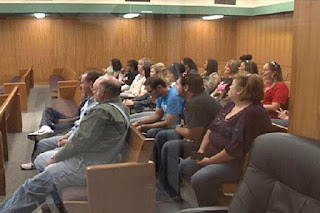 Regardless of the outcome of the hearing, there will be a big rally at the next Kountze Lions Home Game Oct. 5th, 2012. We will have signs and t-shirts supporting these kids and supporting their rights.

Kountze ISD Superintendent Kevin Weldon got some bad advice from Texas Association of School Boards and Weldon BANNED students from even making their own personal signs with Bible verses to hold at football games after receiving an anonymous complaint.

It did not take long for the community to take a stand against this Superintendent's decision. A facebook group Support Kountze Kids Faith got 30,000 members overnight and local political leaders like Congressman Steve Stockman and State Rep James White spoke out in support of these students. Now the issue has become a national one with Todd Starnes (Fox News Radio), and other national media outlets covering the issue today.

Judge Thomas made a very good decision to err on the side of these students' religious rights until a hearing on the matter.

This is why it is important to support good Judges. I knew Steve Thomas was a great guy so I supported him to be appointed as Judge. When the election came around, there was no one I would have voted for to be District Judge over Steve Thomas. Judge Thomas is a great guy who is very knowledgeable and fair. It is good to see that voting in good judges, even locally, can have a huge impact.

Governor Rick Perry wisely appointed Steve Thomas to be the State District Judge over Hardin County following the death of Judge Plunk. Thomas had run for the position as a Republican just a couple years early and nearly unseated the long-time Democrat Judge Plunk, so it was an easy decision to pick Steve Thomas to fill in as Judge until the next election. The primary elections are over and Steve Thomas ran unopposed in the Primary and will be unopposed in the general election so he will retain his seat as a now elected State Judge.
Posted by David Bellow Posted at 11:22 PM