This is a great opportunity to see the movie Obama's America 2016 movie for FREE.

The movie will be showing THIS WEEKEND September 22nd, 2012 at 12:30PM at the Carmike Pines Theater in Silsbee, TX in southeast Texas.

"Be sure to call 832-704-6900, give your name and reserve your complimentary seats to join Mr. Stockman and fellow conservatives in seeing this blockbuster documentary exposing Mr. Obama's roots and true agenda!

Your admission will simply be your completed door prize drawing form.

This movie is being shown for FREE thanks to Congressional District 36's new Congressman Steve Stockman. Yes, I know that technically he is not our new congressman until after the November election, but there is ZERO chance that anyone other than a Republican will win the VERY Conservative Texas Congressional District 36 so, since Steve Stockman won the Republican Primary, he will for sure be our new congressman. 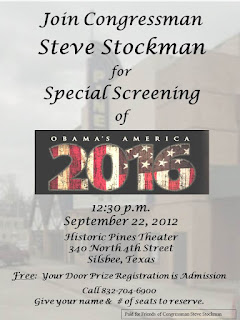