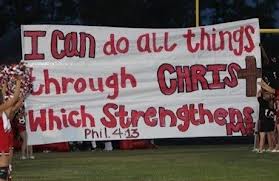 New Congressional District 36 Congressman Steve Stockman and Texas State Representative James White have released Statements today in support of the students (cheerleaders) in Kountze, TX who have come under attack for expression their faith on banners and posters at school football games. The students have been banned from holding personal signs at football games with anything religious in nature on the sign or banner.

Word of this attack on Christian Religious Expression has spread far and wide. Fox News (Todd Starnes) called down here today and the Facebook group "Support Kountze Kids Faith" has reached over 30,000 fans overnight before the group went from Open to Closed because the group moderators could not keep up with the traffic.

The Liberty Institute sent lawyers to Kountze today to lend legal representation to this group of kids and tomorrow lawyers from the Christian Law Association (CLA) will be coming into town.

There is a big rally being planned for the next Kountze ISD Football Home Game on October 5th, 2012. We are hoping to have thousands of supporters show up holding signs and banners supporting these students.

The Kountze Superintendent who is limiting the freedom of Expression of these kids should probably start packing his bags. This is not San Francisco or New York. This is East Texas where people still love Jesus and don't like liberals who try to take away their Constitutional Rights.

I am very proud of the students that attend Kountze ISD. Today, when our culture has degenerated into a moral abyss of gratuitous sex and violence on TV, corruption at the highest level of government, and malfeasance in our business boardrooms, these students have stepped up and said, they want better and it begins with Faith.

I wholeheartedly support these young people and their public profession in Christ and I am encouraging their local leadership to find the appropriate constitutional and respectful way to ensure their freedom of worship, while upholding the constitutional protection against the establishment of religion.

Your Fellow Brother in Christ