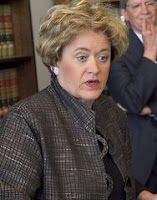 I recently posted up an article about Texas Democrat State Repersentative Naomi Gonzalez getting arrested for drunk driving and crashing into people. What is even worse is that the Texas Legislature Praised this Drunk Driving Democrat after her arrest with a standing ovation and some gave her flowers!

Well now, not long after the arrest of Rep. Gonzalez, The Democrat Travis County District Attorney, Rosemary Lehmberg, has been arrested for drunk driving. She refuses to resign. How about that for Texas Political Corruption. A Texas D.A. who prosecutes Drunk Driving Cases is a drunk driver herself!

That is the problem with Texas though, there is no real punishment for drunk driving. Even if you kill someone, many times you will get a light sentence or NO jail time at all! I remember seing someone in Texas getting a life sentenc for drunk driving, but that was because it was his eighth time! Why was he not punished the first 7 times?

Drunk Driving is a leading killer of people in Texas and in the nation. When will we do something about it?


Travis County District Attorney Rosemary Lehmberg, arrested and charged with drunken driving overnight, plans to remain in office and will not resign, according to a spokeswoman.
According to county records, Lehmberg, 63, was arrested by Travis County deputies in Northern Travis County near RM 2222 and FM 620 and booked into the county jail shortly after 2 a.m.

According to an arrest affidavit obtained this morning, a citizen called 911 around 10:45 p.m. Friday, reporting that a motorist was driving a four-door Lexus in the bike lane for at least a mile on southbound FM 620 and that she was weaving in and out of traffic.

At one point, the affidavit said, Lehmberg crossed into oncoming traffic near Comanche Trail.

Posted by David Bellow Posted at 5:29 AM