update about Saudi National who is supposed to be Deported: Beck Breaks Exclusive Information on Saudi National Once Considered a Person of Interest in Boston Bombings

previous story about Boston Bomber who should have been deported but Obama's Policy allowed him to be here:
The Obama administration could have and should have deported Muslim Boston immigrant terrorist after he had a criminal conviction in 2009. This Muslim terrorist should have never had a chance to complete this terrorist attack because he should have been out of the country years ago after his assault conviction. This is what happens when Obama tries to pick and choose which criminals to deport. I am all for people coming to America to have a better life but they should want to become an American, follow our laws, and not become dependent on the government. Obama wanted to give this guy a second chance because his administration did not see him as a threat even after the guy got a criminal conviction. Still think he is not a threat Obama? There are dead Americans and others with no legs who would beg to differ. 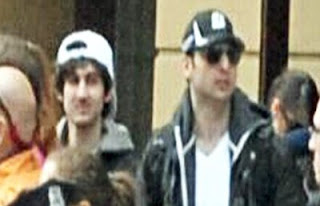 One of the Chechen terrorists who carried out the Boston Marathon bombings could have been deported years ago after a criminal arrest and/or conviction and the other was granted American citizenship on the 11th anniversary of the worst terrorist attack on U.S. soil.
Tamerlan Tsarnaev, the 26-year-old killed in a wild shootout with police, was a legal U.S. resident who nevertheless could have been removed from the country after a 2009 domestic violence arrest and conviction, according to a Judicial Watch source. That means the Obama administration missed an opportunity to deport Tsarnaev but evidently didn’t feel he represented a big enough threat.

Thankfully one of these terrorists has already been killed. The second suspect is still on the loose but it is only a matter of time before they find him too. Hopefully they can get him without anymore innocent people getting killed.

Read more about the Boston Terrorist not getting deported here: http://www.judicialwatch.org/blog/2013/04/boston-bomber-could-have-been-deported-after-2009-conviction/

This whole situation reminds me of that Muslim terrorist Nidal Hasan who killed over a dozen United States soldiers at Fort Hood Texas. The government knew he was talking to terrorists but they decided not to kick him out of the military because of political correctness. They thought that it might look bad or look like racial profiling to kick out the Muslim even though he was connected to terrorists and they knew it. So they let him stay and he ends up killing over a dozen soldiers. It only adds insult to injury that the Obama administration refuses to call the attack at Fort Hood a terrorist attack. Those soldiers do not even get a Purple Heart for being wounded by the enemy.

Obama is sure to get a black eye over this Bodton terrorist attack. remember at the beginning of this Boston bombing the government had detained a Saudi national here on a visa as a person of interest? They ended up not connecting this Saudi national to the bombings but they still kicked him out of the country because he already had deportation orders due to his possible terrorist activities. So even though he was not connected to this bombing this hurts Obama because this Saudi had a deportation order for terrorist activities and Obama had not deported him yet.

My heart and prayers go out to the people in Boston. May we never let something like this ever happen again due to political correctness.
Posted by David Bellow Posted at 3:05 PM