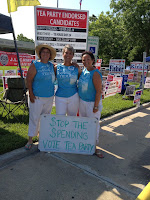 Two activists, Lianne Russell and Tanya A. Robertson, walked into the Harris County Elections Division (Houston, TX) last week and are given ACTUAL ballots when they only asked for Mail In Ballot Applications. They were given these ballots without even being asked to show a photo id or proof of identity!

It gets worse, the hosting entity (Clear Creek ISD) is the School District that will benefit from their own election. They handle their own ballots, count their ballots, and police their election.

A simple mistake? Even if it was, it still goes to show the importance of having measures in place to prevent voter fraud and to protect ballot integrity. Heck, these two activists did not even want ballots and they walk right in and out of the Harris County Clerk’s office with hundreds of them!

The following is a statement that was emailed to me from one of these Texas Activists:

Statement from Activist Tanya A. Robertson:

Statement from Tanya A. Robertson concerning the series of events that took place from Tuesday, April 2nd through Thursday April 4th, 2013:

A fellow activist, & friend, and I are working to get out the vote in the Clear Lake area local elections and decided that we needed to pick up some mail in ballot applications Tuesday morning, since we were going to be in Houston anyway.

When we arrived at the office to accomplish this task in the Harris County Tax Office building in Houston, we asked for the applications. At that time, we were asked with whom we spoke that instructed us to pick up applications at this location…..my friend answered someone at TXGOPVOTE, I believe, & she was told that we could pick up 200 “mail in ballot applications”, a piece. At that point 2 more employees got involved and started asking questions that were confusing to me. Repeatedly asking “who did you talk to?”, “how many do you need?”, “what election?”& “can you come back to get them because they are not printed yet?

Now, I was very confused and stated that I had no idea that ISD elections were so different from others because of all the questions we were being asked.

Then, we were asked if we had about 10 minutes & they would be printed. So, we planned on waiting. A couple of minutes later, we were asked to step into the room that contained printers and were asked more questions about CCISD board positions in this election, precincts involved, how many we needed for each, and in what languages. At this point, something didn’t even feel right but we continued to answer the questions as best that we could to get the applications, or so we thought.

When the printer would not work, I left to get my car because the time was up on my parking spot and I sat in my car waiting for my friend, another 30 minutes.

Fast forward to Wednesday afternoon, my friend called to let me know that she received a text from the clerk’s office stating that we had mistakenly been given the actual CCISD mail in ballots in addition to the applications. Shocked, neither one of us knew what to do nor was anyone offering any solutions until Mr. Stan Stanart, Harris County Clerk & Chief Election Official, got involved. I had sent him a personal message through his facebook page stating the situation and to ask for help. He was gracious enough to call me and said that we needed to return the ballots the next morning. He also stated that new ones would be printed and the ones we had would be voided.

Side note: We never opened the cellophane wrap that was around those ballots & the contents were not visible due to the cover sheets on both sides.

Thursday, April 4th, 2013, the ballots were hand delivered back to the Harris County Election Office.

The Harris County DA’s office was there waiting for us, and we were both interviewed. HCDA Investigator Jones stated that he would continue the investigation and would let us know when it was resolved. During our interview, he told me that it was assumed that we were sent by CCISD, even though no one asked for any ID or our names.

In the grand scheme of things, I am a true believer in “Things happen for a reason” and I believe that is true for this situation also. Keeping in mind that we are human and we all make mistakes but they are meaningless unless we learn from them:


1) In the future, any Texas County election division should be shown a photo ID, of the point person named by the agency conducting the election, BEFORE ballots are picked up.


2) It concerns me, personally, that CCISD conducts/handles/controls their own election and has a vested interest in the outcome of said election. (i.e. $367 Million Bond for this election) This is a recipe for disaster and leaves the door wide open for voter fraud.


3) When someone from CCISD picks up these ballots from the Harris County Election Division, what is the protocol for chain of command and ownership?


5) Who works the polling locations for the CCISD elections? Who trains them?


6) Why are the CCISD voting locations different from the regular local election voting locations, happening on the same day? This is a violation of the Voting Rights Act. This disenfranchises voters because they will have to travel to 2 locations to participate in their local and in the ISD election.


7) Why are the CCISD voting times different from the regular local election, happening on the same days? Another violation of the Voting Rights Act. Wouldn’t it save the tax payers money to consolidate local polling locations with ISD polling locations?

These are valid concerns that MUST be addressed! Election integrity starts at home.