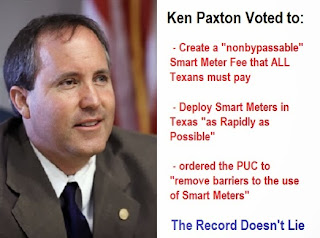 Ken Paxton supporters in denial about exact wording of law that Ken Paxton passed:  "The Commission (PUCT) SHALL establish a nonbypassable surcharge for an electric utility or transmission and distribution utility to use to recover reasonable and necessary costs incurred in deploying advanced metering.” And it is the intent of the legislature that net metering and advanced meter information networks be deployed as rapidly as possible to allow customers to better manage energy use and control costs, and to facilitate demand response initiatives."

The bottom line is that Ken Paxton voted to mandate a Smart Meter fee that all Texans must pay regardless of if they get or even want a Smart Meter. Go ahead, prove me wrong. Show me that Paxton did not vote to create a “nonbypassable” Smart Meter surcharge.

Supporters of Ken Paxton like to point out that Barry Smitherman was the head of the PUC when the PUC was in charge of implementing smart meters. They conveniently ignore that Paxton’s role in Smart Meters, so I wrote an article showing that it was actually the Texas Legislature and Ken Paxton who voted to create and promote smart meters and even to mandate a fee that all Texans must pay for the meters. This law told the PUC and Smitherman to implement Smart Meters. Smitherman did not create Smart Meters, he was just following the law and implementing them because the law that Paxton voted for instructed Smitherman to implement them. Only Obama decides what laws he is going to follow or toss out. After I revealed that information, all Hell broke loose with Paxton supporters calling me names and saying I am a liar. They say that Paxton and the legislature never intended for the meters to be mandatory, but they conveniently ignore the actual wording of the law that Paxton supported. At least I don’t call names and am actually trying to show evidence about Paxton’s vote for Smart Meters. For the record, I do not think Ken Paxton is a bad guy and I know he is conservative. I just also know he is not as perfect as his supporters say he is and I believe 100% that Barry Smitherman is more conservative and a better leader and the best man to be the next Texas Attorney General

Let’s say that they are right and Paxton and the legislature did not intend for Smart Meters to be mandatory. That only makes what Paxton voted for EVEN WORSE because the law that Paxton voted for, HB 2129, Clearly and Indisputably states "The Commission (PUCT) SHALL establish a nonbypassable surcharge for an electric utility or transmission and distribution utility to use to recover reasonable and necessary costs incurred in deploying advanced metering.” So it is an indisputable fact that Paxton voted to mandate a Smart Meter fee that all Texans must pay. If Paxton and his supporters are denying that Smart Meters were never intended to be mandatory, then Paxton is admitting that he voted to force all Texans to pay for Smart Meters even if they do not want one and do not get one. Voting to force someone to pay for something they do not want and will not get is not a good thing and it is interesting to see the Paxton supporters act like there is nothing wrong with that.

Smitherman Implemented Smart Meters that Paxton and Legislature voted to create, at least Smitherman tried to add an opt out in the law

The Texas legislature told the PUC to implement the meters and to find ways to deploy them as rapidly as possible because the advanced technology is good for Texas and consumers. So yes, Barry Smitherman did his job and he implemented smart meters and promoted them. Only in Obamaland can someone ignore a law. Smart meters were the law passed by the legislature and the law required the PUC to implement them. So that is what Barry Smitherman did. Smart meters are actually not all that bad and many people love them because they do have many advantages. The issue that arose is that not everyone likes them or wants them because there are many questions surrounding the meters including privacy and health. Instead of ignoring the voice of the people, Smitherman actually realized the flaw and requested the Texas Legislature to amend the law to include an opt-out so that people who do not want one do not have to get one. Ken Paxton, who voted on the law, never once made a statement supporting opt outs and never once tried to amend the law or support any bills to amend the law.

Debate over whether or not Smart Meters are Mandatory

I admit, there certainly can be a difference of opinion over whether or not the law that Paxton passed actually mandated that everyone has to get a smart meter. The problem is that the law does not specifically say whether or not people can opt out of it. If you look at the wording of the law that requires everyone pay a mandatory fee for smart meters and also the part in the law where the legislature calls for the meters to be deployed as rapidly as possible, it sure would seem as though the law intended for all old meters to be replaced with this new smart meter technology. That I admit can be debated.

NO Debate over the FACT that law Paxton voted for FORCES ALL Texans to pay a nonbypassable fee to pay for Smart Meters and called for the meters to be deployed as rapidly as possible.

We can debate whether or not Paxton and the legislature intended Smart Meters to be mandatory. People can try to say Smart Meters were all the fault of the PUC who was only just following the law and implementing the meters. We CANNOT debate the fact the Paxton and the legislature passed a law that promotes Smart Meters as good, calls for them to be rapidly deployed, and requires everyone to pay for Smart Meters. So do ahead, you can reasonable deny that Paxton intended Smart Meters to be mandatory, but that does not make what he voted for any better. Read the law yourself below. Paxton had to have wanted to promote Smart Meters based on the wording of the law the voted to approve. Does what you read below look like something that someone would vote to approve if they did not want to push Smart Meters?

Exact Wording of Law that Paxton Supporters Cannot Deny even if the Deny that Paxton intended Smart Meters to be Mandatory:

In 2005 Ken Paxton and Dan Branch voted to approve HB 2129. Section 7(h) of HB 2129 states: "The Commission (PUCT) SHALL establish a nonbypassable surcharge for an electric utility or transmission and distribution utility to use to recover reasonable and necessary costs incurred in deploying advanced metering and meter information networks to residential customers…"

Section 8(a) of HB 2129 states: “In recognition that advances in digital and communications equipment and technologies, including new metering and meter information technologies, have the potential to increase the reliability of the regional electrical network, encourage dynamic pricing and demand response, make better use of generation assets and transmission and generation assets, and provide more choice for consumers, the legislature encourages the adoption of these technologies by electric utilities in this state."

In 2007, the Texas Legislature passed HB 3693, again making clear its intention that smart meters be deployed as rapidly as possible. Again, Ken Paxton and Dan Branch voted for this legislation. Section 20(i) of HB 3693 states: “Subject to the restrictions in Subsection (h), it is the intent of the legislature that net metering and advanced meter information networks be deployed as rapidly as possible to allow customers to better manage energy use and control costs, and to facilitate demand response initiatives."