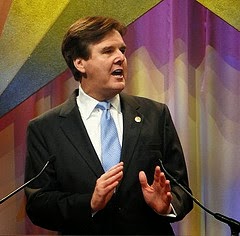 Dan Patrick is one of the few leaders in Texas to take a stand against the unbelievable Texas Tuition Set Aside, also known as the Texas Tax on College Student Tuition. That is right, in Texas of all places the State has a law that forces all college students to pay a MINIMUM 20% "tax" that is added to the college tuition that students pay. The tuition tax goes to pay for other people's college tuition. Even if the student is having to take out students loans to pay for their tuition, they still have to pay the tax which means they are taking out a loan to pay for another student's free tuition. UNBELIEVABLE! Texas students are being punished for taking a positive step forward and trying to get a college degree.

Texas State Senator Dan Patrick, who is running for Lieutenant Governor, is known to be a fighter for Texans and for Conservative Values. We all know the high profile issues that Patrick has stood up for like pro-life issues and gun rights issues. Most people have no idea though about the battle that Dan Patrick has fought to stop the Texas Tuition Tax. most people do not even know that there is a Texas Tuition Tax!

The Texas Tuition Tax was a hidden tax. Students never had any idea that they were even being forced to pay it as part of their college tuition. When Dan Patrick got elected to the Texas Senate, he set out to go against the grain and expose and stop this tax. The first step in taking down the tax is to inform people about this outrageous tax. In 2009, Dan Patrick introduced and passed SB 1304 to force colleges to reveal to students that they were having a large portion of their tuition set aside to pay for other people's tuition.

I have always thought Dewhurst was a good guy. I believe that personally he is a conservative. We need a fighter though. This is exactly why I supported Ted Cruz for US Senate over Dewhurst. Ted Cruz boldly stands and fights for conservative values while Dewhurst, although he is conservative, does not stand up and fight like he should. I understand bi-partisanship, but many of his committee chairmen are some of the worst liberals in all of Texas. Many issues, like Patrick's Stop Texas Tuition Tax bill, are also left to die in Senate Committees without even being considered for a floor vote.

Thank You Senator Dan Patrick! I know that if you win the Texas Lieutenant Governor election in 2014 then you not hesitate to make sure conservative issues, like stopping the tuition tax, do not get killed in committee.

This Texas Tuition Tax is outrageous and conservatives in Texas need to spread the word about this tax and join in to help Dan Patrick in his efforts to stop it!
Posted by David Bellow Posted at 2:32 PM