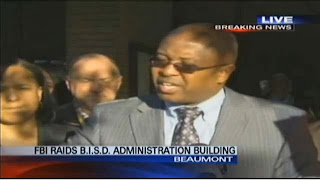 The Federal Bureau of Investigation has raided the Beaumont Independent School District and homes of two top School Officials. The FBI is assisting the US Attorney’s Office investigate allegations that School Officials created bogus accounts to steal money from the school and from the taxpayers. There is no official figure but rumors are that the total stolen could be in the millions of dollars.

No one should really be surprised at this I suppose. We are talking about the notoriously corrupt Beaumont ISD. I have written several articles about Beaumont ISD corruption in the last few years and I never even scratched the surface. My most recent article about Beaumont ISD was only a couple of weeks ago and was about a Federal Judge ruling the Beaumont ISD/DOJ election was illegal and also about BISD paying a top Administrator, Jessie Haynes, to be a fugitive.

According to KBMT Channel 12 News in Beaumont, “Agents with the Federal Bureau of Investigation raided the administration building early Thursday morning. They also raided the home of the district's Director of Finance Devin McCraney and the home of District Comptroller Sharika Allison.”

The Texas Education Agency is currently investigating BISD. It is believed that the TEA discovered the mismanaged money trail and contacted the Federal Authorities which led to the raid. The State of Texas denies that they knew anything of the FBI raid and the TEA says their investigation is unrelated to what the FBI is investigating.

BISD School Board Member Mike Neil has been fighting to correct problems in the school district ever since he was elected. Neil told KFDM Channel 6 News in Beaumont, "There's no doubt in my mind there's been corruption in the past," said Neil. "Whether or not there's currently corruption, I'm not going to say. But there's no doubt in my mind this is not a correctly run district, especially from a business standpoint."
Posted by David Bellow Posted at 10:45 PM