From the Washington Times

GOP senators ask Panetta to make sure troops can vote

Six Republican senators are asking Secretary of Defense Leon E. Panetta personally to intervene to ensure that U.S. troops stationed away from home get the chance to register and vote in the upcoming election.
They say Pentagon officials are ignoring a 2009 law that ordered the military to set up a special voting-assistance office at every U.S. base around the world, to make sure troops can negotiate the confusing patchwork of 50 different sets of state registration and absentee voting requirements, and get their ballots mailed in time.
“The price of [the Department of Defense‘s] failure to follow the law will likely be paid this November by military service members and their families, whose voting rights were to have been safeguarded by this provision,” wrote U.S. Republican Sens. John Cornyn of Texas, Kelly Ayotte of New Hampshire, John Barrasso of Wyoming, Richard Burr of North Carolina, Saxby Chambliss of Georgia and James Inhofe of Oklahoma.
“Many of the on-base voter assistance offices that do exist are grossly inadequate, and at least half of them are either closed or completely unstaffed,” states the letter, sent to Mr. Panetta Friday.

Also, study says military voting this year is bleak... many soldiers not even getting ballots... why is military not doing more to make sure soldiers get opportunity to vote?

Also, from the ACLJ:
Why is President Obama, the Commander-in-Chief, trying to limit military voting rights? Our men & women in uniform deserve better. 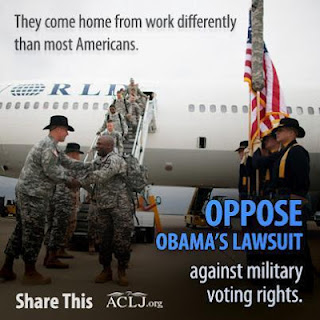