A Texas mother is outraged by a school quiz given to her son that seemingly blames the United States for the Sept. 11, 2001, attacks that killed nearly 3,000 people.

Kara Sands posted the test her son received in fifth grade at the Flour Bluff Independent School District in September on her Facebook page, which attracted more than 1,600 users in support of her concerns. Sands told KRISTV.com that she was most dismayed by a question that asked why the U.S. may be a target for terrorism. Her son chose the correct answer to the test that covered material from a video students watched in class: "Decisions we made in the United States have had negative effects on people elsewhere."

"I'm not going to justify radical terrorists by saying we did anything to deserve that; over 3,000 people died," Sands told the station.

Sands later met with the school's principal, her son's teacher and contacted the video's distributor, Safari Montage, whose representatives stand behind the video but have already changed the corresponding quiz.

School officials said Safari Montage representatives apologized for the wording of the question, saying it was not their intent to blame the United States for the terror attacks. 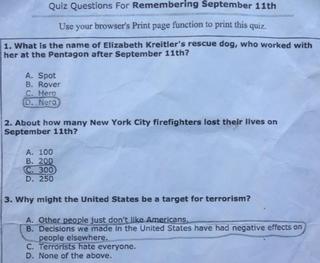 Posted by David Bellow Posted at 9:56 AM