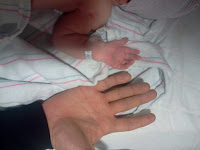 GOP Texas State Representative Sarah Davis has slammed Republicans in a Houston Chronicle Op-Ed. Davis says Republicans should not be passing abortion restrictions because it is "not the role of the government" and "the Republican Party should not dictate to women" whether or not they can have the choice to have an abortion (which we know means the choice to kill millions of unborn babies) That, she says, should be decided by a woman and her doctor.

This Op-Ed seems to be a response to the backlash Davis has seen after a recent article that I wrote asking the Texas GOP to follow the wishes of the Texas Republican Platform and NOT give Party money to pro-abortion candidates like Sarah Davis. Many in the Texas GOP were tricked by Davis into believing she was pro-life. I think this Op-Ed should make things pretty clear to all Texas GOP officials that Davis is NOT pro-life.


Pro-abortion Republican Texas State Representative Sarah Davis is starting to show her true colors. We already know that she, the only Republican to oppose the Texas Pro Life Bills, sided with the orange clad, pro-abortion mob that was protesting the pro-life bills. It was thought though that the reason she took the anti-life stance was because she is in a district that would not elect her if she was pro-life. We now know that to be false. First, pro-life Ted Cruz won in her district with a higher percentage than her. Second, Sarah Davis has recently written an op-ed in the Houston Chronicle that goes beyond defending her pro-abortion stance. In the Op-Ed she bashes the Republican Platform and all Republicans who try to restrict abortions.

Davis outrageously claims in the Op-Ed that she is being Republican by opposing abortion restrictions because Republicans believe in a core value of freedom. I don't know how old Davis is, but I am pretty sure that opposing abortion has been a core Republican value since before she was old enough to know what a core value was. Davis obviously also does not know that the first Republican President, Abraham Lincoln, ended slavery in America. There were some people who believed in slavery for the same flawed reason that Sarah Davis believes in abortion. They said that the government should not get involved in slavery because slaves are below human and the government should not get involved between the right of a slave owner to own, beat or kill slaves. I guess Sarah Davis also believes that Abraham Lincoln was a bad Republican by using government to outlaw slavery and infringe on the freedom of a slave owner?

Someone should give Sarah Davis a copy of the Declaration of Independence. If she reads the first few lines she will see that everyone is endowed by our Creator with an unalienable right to LIFE. What about the life of the unborn baby? I believe in personal freedom too but not to the extent that it is legal to kill innocent unborn babies. You cannot exercise your freedom if you are DEAD! It just blows my mind that people actually can think that a new born baby is cute and is a human, but just seconds before when the baby was still coming out the same people think that it is just a mass of flesh that is not a human and can be slaughtered.

Davis, like all Democrats and Planned Parenthood, claims that she is NOT pro-abortion. She claims to be pro freedom like being for the freedom of someone to kill their own baby. Sarah and the Democrats use these trick words like pro-choice and pro-reproductive rights to make it sound good and it sounds like they are not for abortion when that is exactly what they are advocating for.

In the Op-Ed, after bashing abortion restrictions, Sarah Davis hypocritically says that she would have been for the abortion restrictions if there were just a couple of changes. She says that she is not opposed to restricting abortions after 5 months if only there was an exemption, for instance, for the health of the mother. This is a TRICK that Sarah Davis is using to make it sound like she is for pro-life even though she has voted against every big pro-life bill that she has ever seen as a State Representative. You see, the pro-life bills passed by Texas already have an exemption for the life of the mother. Sarah Davis was not happy with that because it restricted too many abortions so Sarah wanted to add an exemption for the health of the mother. Why? Because by adding an exemption for the health of the mother would still allow basically any abortions after 5 months because anyone could use the excuse that it is bad for their emotional health if they have the baby.

Abortion is Murder, not a Wedge – Why Are Republicans Attacking Pro-Life Republicans for Exposing Wendy and Sarah Davis?

Surprise! Only one quarter of Wendy Davis' Twitter and online support came from Texas