Surprise! Only one quarter of Wendy Davis' Twitter and online support came from Texas

Why am I not surprised? Most of the Twitter Tweets supporting Wendy Davis blocking the Texas Pro-Life bill came from OUTSIDE OF TEXAS. She does not represent the majority of Texans who are against killing innocent babies. She has to get her support from liberals outside of Texas!


the following is from Cahnman's Musings: http://acahnman.blogspot.com/2013/06/only-one-quarter-of-wendy-davis-online.html


Only one quarter of Wendy Davis' online support came from Texas 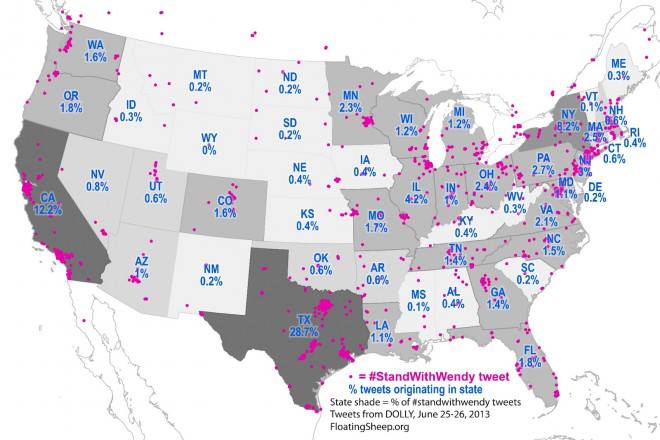 
The map above, created by the academic research group Floating Sheep, shows that while the volume of Twitter activity for #StandWithWendy was—naturally—greatest in Texas itself (nearly 29 percent of all tweets), there was also quite a bit of chatter coming out of places like New York state (8 percent), California (12 percent) and even places like Illinois (4 percent).

That should tell you everything you need to know about the 'emerging groundswell in Texas' narrative.