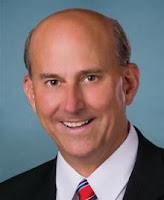 House Republicans held a closed-door meeting at the Capitol on Wednesday to elect their leaders for the upcoming Congress in January.  Gohmert nominated Gingrich – who led House Republicans during the Clinton presidency – to serve as Speaker, even though Gingrich is no longer in Congress.

Technically, a nominee does not have to be a member of Congress to serve as Speaker. However, a non-member has never held the post.

Asked about the nomination, a Gohmert spokesman told CNSNews.com that Rep. Gohmert felt the country could not “proceed with business as usual” and so nominated Gingrich.

“Rep. Gohmert felt like we could not proceed with business as usual with the country in trouble,” Communications Director Kimberly Willingham told CNSNews.com.
Posted by David Bellow Posted at 10:25 AM