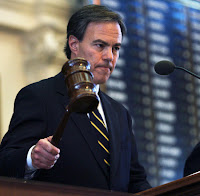 This is TEXAS for crying out loud! How is it possible that we have a speaker who hates conservatives? These emails that have been revealed should not come as a surprise to anyone because Straus already has a proven record of attacking Conservatives, Hurting them in redistricting, Campaigning against them, and even giving money to Democrats to beat Republicans. Straus is no conservative leader and should NOT be the leader of the Republican majority Texas House of Representatives. The only reason Straus is leader is because he was elected leader when the house was split between Republicans and Democrats and all Straus had to do was get a few liberal Republicans to join with all the Democrats to elect him as the Speaker. Once he became speaker he was able to hold on to the power by threatening any State Rep who opposed him by hurting them in redistricting and not putting them on important committees. Not to mention Straus has tons of money that he uses to pay off his supporters in races against conservatives who did not support him for Speaker.

It is time to OUST STRAUS! Call your State Reps RIGHT AFTER THE ELECTION and ask them to vote against Joe Straus..... We all know Joe Straus is going to have people calling all the State Reps in TX after the election to try to get them to support him for speaker so we need to call our State Reps before Straus does.

The last time someone ran against Joe Straus for Speaker of the House, it was a last minute effort to remove Straus from power and therefore was not able to gain the steam it needed before the Speaker Election. This go-around is different though because State Rep Bryan Hughes has come out VERY EARLY and has announced he is challenging Joe Straus for Speaker. This will give the Conservatives and Tea Party groups in Texas the time needed to mount a campaign to defeat Straus. This will give them time to put pressure on their State Reps to vote against Straus. Hopefully, articles like this that reveal how Straus is waging war against Conservatives will help keep the momentum going and be the proof needed to OUST STRAUS!