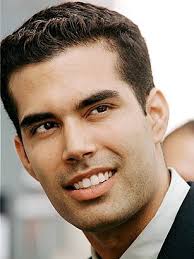 George P. Bush is a Conservative Hispanic Texan. His father is Jeb Bush who is a former Florida Governor and brother of former U.S. President and Texas Governor George W. Bush. George P. Bush's mother was born in Mexico.

Ted Cruz was recently elected to be a U.S. Senator from Texas and is already been thrown into the national spotlight.

If George P. Bush runs for statewide office in Texas, expect him to win and move up the ladder very quickly. The Republican Party is desperate for guys like him so that the Republican Party can show that our conservative values are welcoming to all people of all colors. It was the Republican Party after-all who freed the slaves and elected the first black officials. Over time though the Democrats have been able to lie and portray Republicans as a party for only white people. The Democrats give handouts to the minority communities to basically buy their favor. Those handouts only keep minorities down though. Republicans want to lift minorities up and not just give them free stuff, but teach then how to work their way up and become great and make a good living for their families. Republican Conservative values are values that are shared by all people of all colors.

It is not certain when George P. Bush is going to run for office, or what he will run for. One thing is certain though is that he has taken the first step. The Texas Tribune is reporting that George P. Bush has filed paperwork with the Texas Secretary of State appointing a campaign treasurer. This is the first step required for someone wanting to be a candidate for a Statewide office in Texas.

George P. Bush is 36 years old and is an Attorney. He is also a political consultant and a founding board member of the Hispanic Republicans of Texas Political Action Committee.
Posted by David Bellow Posted at 11:17 PM