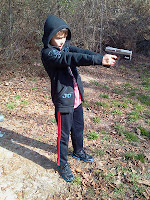 I can already see the liberal news headlines.... Texas Wants to Teach Students How to Kill is what the gun control advocates will say. They will post pictures (like the one on the right) that makes it look like Texas is teaching little kids how to be a member of the Texas Militia or something. They are wrong. Texas State Representative James White has filed a bill that will allow High Schools in Texas the option of having a gun class. It would be a class where students learn how to use and clean firearms properly. This is a great bill. Many gun accidents happen because adults and kids are afraid to handle, or do not know how to handle, or clean a gun. They are not taught to respect it and it is not ingrained in them to always think about safety with guns. Also, in this class, the students would even be taught about the history and importance of the second amendment. Again, this would be an optional class for school districts and parents would not be forced to put their kid in this class.

AUSTIN, TEXAS– Today Representative James White filed HB 1142, which provides locals schools boards the discretion to add an elective course offering that would give their high school students the opportunity to gain an appreciation of the Second Amendment of the United States Constitution.

“The origins of liberty in our great nation reside in large part with the idea espoused in the Second Amendment,” said Representative White. “As a conservative, I want Texas students to have the option to learn more about both this critical part of our Constitution, and the practical knowledge of how to safely operate the common arms Texans use for hunting and self defense.”

HB 1142 would educate students about firearm safety and training, and hunter’s safety. All instructors would be required to be a qualified and certified handgun instructor or a licensed peace officer, employed by a local law enforcement agency. This optional course would involve students learning proper maintenance, cleaning, and safe use of common firearms such as: pistols, revolvers, rifles and shotguns. The bill would also provide for education on the history and importance of the Second Amendment to the United States Constitution.

"Conservatives in Texas want nothing more than to preserve the freedom that was granted to us in the United States Constitution. HB 1142, along with a growing list of complementary bills being filed this session, will ensure that Texas leads the nation on standing up to the Obama Administration's troubling rhetoric on gun control," said Representative White.

HB 1142 is part of a strong lineup of conservative legislation that seeks to protect and expand the 2nd Amendment rights of Southeast Texans. State Rep. White is a joint author of two prominent tried and true conservative pieces of legislation, HB 47 and HB 700 to strengthen 2nd Amendment rights in Texas. HB 47 updates the required number of hours to earn and concealed handgun license. HB 700 seeks to allow Texans the option of open carry. Besides being a joint author, State Rep. White is co-authoring the following pro-2nd Amendment legislation:

HB 48: would provide CHLs the opportunity to renew their license in a continuous process on line.

HB 223: would allow members of a school district's school board and the superintendent with a concealed carry license to carry into school board meetings.

HB 627: exempting the intrastate manufacture of a firearm, a firearm accessory, or ammunition from federal regulation.

HB 698: requires that digital or electronic fingerprinting be offered within 25 miles of applicants.


Representative White is the Member of the Texas House of Representatives for District 19, composed of Polk, Tyler, Jasper, Newton, and Hardin counties.

State Representative James White
“An armed man is a citizen. An unarmed man is a subject."
Posted by David Bellow Posted at 12:57 PM