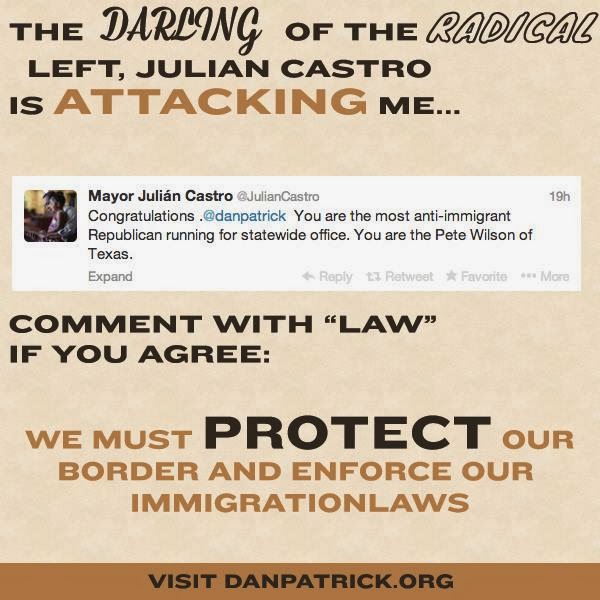 Dan Patrick must be doing something right then. Dan Patrick is running for Texas Lieutenant Governor. Patrick has been publicly attacked by one of Obama’s friends. A national Democrat rising star. A staunch liberal. San Antonio Mayor Julian Castro.

I learned about the attack against Patrick from Facebook. A friend of mine shared Dan Patrick’s Facebook status photo (see photo above).

Congratulations Dan Patrick, you have been attacked by Julian Castro. You must really be doing something right. The liberals are afraid of you. They know you will not back down if you win your race, and that means they do not want you to win.

I do not consider an attack from a liberal as a negative thing. I consider it a badge of honor for a conservative to be making liberals so mad that they publicly attack you.

I am sure that Castro does not like Patrick because Dan Patrick was rated as the most conservative Texas State Senator this year.

This attack from Castro appears to have be a result of Patrick’s strong stance on securing the Texas/Mexico border. Conservatives believe in LEGAL immigration so that people can come make a better life for themselves. On the other hand, conservatives also believe in securing the borders from sex trafficking, and drug smuggling, and gun smuggling, and illegal immigration. A good portion of illegal immigrants who sneak over are violent criminals. Castro and Obama know that these illegals who are criminals will likely vote Democrat in order to be able to get more government benefits and milk the system that hard working taxpayers pay into. By opposing illegal immigration and wanting to secure the border, Patrick has made Castro mad because Castro will have less people who can vote for him.

Obama's handpicked convention Speaker & the Mayor of San Antonio, Julian Castro, attacked me tonight for defending our borders. I told him back that I was proud to stand up and defend our borders and that it was his friend Obama who caused this illegal invasion! Can you help me get 10,000 LIKES to stand up to Mayor Castro & the left wing's pro-amnesty lobby.
Posted by David Bellow Posted at 12:21 PM