Well, after this little episode, Dan Patrick challenged Julian Castro to a debate. Patrick told Castro that talk is cheap and that he will go to San Antonio any day or time to debate the issue of illegal immigration.

Well, the great news is that Julian Castro accepted! There is not date or time set yes, but I will post the date and time when it becomes available.

Below is the info that was posted on Dan Patrick's facebook page about the debate:

January 24
MAYOR ACCEPTS CHALLENGE TO DEBATE DAN PATRICK ON IMMIGRATION AND THE FUTURE OF TEXASEarlier this week Mayor Julia Castro personally tweeted me accusing me of being the most anti-immigrant candidate running for Lt Governor.

I responded that I would come to San Antonio anytime to debate this issue.

Last night he tweeted he would debate me and I responded that I was ready for fight for the future of Texas.

We are working now to set the time and date as soon as possible to have this important debate. 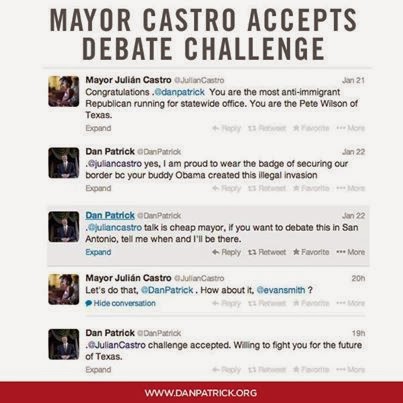