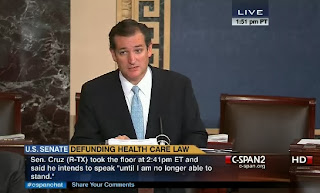 Making the argument for why the Senate should vote on the House Continuing Resolution that funds the
government and defunds Obamacare. He intends to speak, as he said, until he is no longer able to stand.

Here is a link to watch LIVE…

Cruz vows filibuster ‘until I am no longer able to stand’
By Stephen Dinan
The Washington Times
http://www.washingtontimes.com/news/2013/sep/24/cruz-vows-filibuster-until-i-am-no-longer-able-sta/
Sen. Ted Cruz began a talk-a-thon on the Senate Tuesday afternoon and vowed to keep speaking “until I am no longer able to stand” as he tries to halt President Obama’s health care law.
“I rise today to speak for 26 million Texans and 300 million Americans,” Mr. Cruz began.
He took to the floor armed with a big black binder, thick with papers, presumably to read as he talks.
He began at 2:41, and can talk up until noon tomorrow, when under the Senate rules he would have to stop and the Senate would proceed to vote on ending debate and bringing the spending bill to the floor.
The bill right now includes provisions to defund Obamacare, which Mr. Cruz supports, but under the rules Democrats can strip those provisions out with a majority vote. So Mr. Cruz is trying to block the entire bill — including the parts he supports — in protest.
===========

9.24.13 – Sen. Ted Cruz and Sen. Mike Lee speaking on the floor of the Senate today about defunding Obamacare: http://www.c-span.org/Events/Senate-Debates-Continuing-Resolution-to-Fund-Govt/10737441638-1/

=============
9.23.13 – Palin: Light Up Capitol Hill Switchboards – Defunding Obamacare
http://www.breitbart.com/Big-Government/2013/09/23/Palin-Light-Up-Capitol-Hill-Switchboards-to-Defund-Obamacare
“Remember, we elected these senators precisely for moments like this. If they can’t do anything with the power we’ve given them through their elected office, then perhaps it’s time for them to retire and let someone else have a go,"  Palin said. "Opposition to Obamacare carried us to victory in 2010. And 2014 is just around the corner."

…Palin said it was even more important for Americans living in red states—like Alaska, Arkansas, Louisiana, and North Carolina—represented by Democrats to "politely" let their senators know there will be consequences at the ballot box if they vote procedurally to shut down debate in the Senate:
Please call your senators and politely ask them to stand with Senator Cruz. This is especially important if your senator is a Democrat up for re-election in a red state in 2014. That would be Senators Mark Begich (D-AK), Mark Pryor (D-AR), Mary Landrieu (D-LA), and Kay Hagan (D-NC). Remind them politely that we are watching their votes very carefully and even a procedural vote that shuts down this debate will be regarded as a vote for Obamacare, and there will be consequences for them at the ballot box next year. The same goes for Republicans up for re-election. We definitely expect them to stand shoulder to shoulder with Senator Cruz through thick and thin.
…Palin reiterated, "We shouldn’t preemptively surrender the fight to those who rammed through this outrageously burdensome and unaffordable ploy for government control of health care even though some are trying to convince us that the fight is futile."
"Just because a fight isn’t easy, doesn’t mean it’s not worth fighting," she said.
…The number for the Capitol Hill Switchboard is 202-224-3121. Ask for your senator’s office. You can also find their contact information and contact them online at:   http://www.senate.gov/general/contact_information/senators_cfm.cfm