Update: Land Commissioner Jerry Patterson and Governor Candidate Tom Pauken have demanded that the charges be dropped against these men because it is not illegal to open carry the guns the men had in the manner they carried them. Also, it has been confirmed that it was three men who were arrested, not just two. Also, it has been confirmed that the group of men were part of an organization called Open Carry Texas.

At least 3 men (one a war vet in a wheelchair) were arrested today, 9/13/2013, at the Texas Capitol in Austin, TX after Texas DPS State Troopers, not aware of the law, arrested them and then had to think of other charges to put on the men after finding out that it was not illegal for them to open carry the guns because pre 1899 black powder pistols are expressly exempted from the firearms law. It was humorous to see (at about 8:50 into the arrest video below) the State trooper start reading the Texas firearms law and then go silent when he got to the part about pre 1899 black powder pistols being exempts from the law. Instead of admitting the mistake, they go ahead and charge the man with disorderly conduct/causing alarm with a gun. I completely support law enforcement and the Texas DPS Officers are a good group, but they are not perfect and this was wrong. 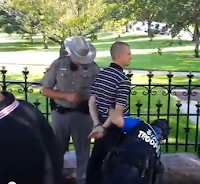 For a self-proclaimed super conservative, gun-rights haven, it is shocking that Texas is one of the minority of states who do not allow some form of open carry for handguns. Yep, you can have a concealed handgun in Texas and pass all the background checks and shooting qualifications just like a police officer, but you cannot open carry like an officer or like citizens in several other states can. Rifles are ok to open carry in Texas, and Texas law also specifically exempts pre 1899 black powder pistols from being defined as firearms.

To exercise their rights, and make a statement that you can carry guns in Texas and be safe, a group of guys went walking around the Texas Capitol LEGALLY open carrying. They knew of course that the police would likely arrest them even though they were not breaking the law, so they had their cameras with them. Sure enough, the Texas State troopers, carrying handguns openly on their hips themselves, came and started making arrests. Two men, Terry Holcomb and Gary Hays, were arrested. After finding out that the pre 1899 black powder pistols were exempts from being considered firearms, the troopers went ahead and charged the men, not for open carrying a handgun, but for disorderly conduct/causing alarm with a firearm. Neither of those laws were broken because in Texas, the simple sight of a gun on someone’s hip or being carried cannot cause alarm. The person has to be doing something with the gun to intentionally cause alarm with the gun like pointing it at people. This reminds me of the recent story of the Master Sergeant in Texas who was legally carrying his rifle on a road march. A police officer did not like it so, even though it is legal to carry a rifle, the soldier was arrested and charged with the same type of disorderly conduct/alarming others with a gun like what these men in Austin were charged with today.

At least the State Troopers at the Capitol today knew enough to know that they group of men COULD have the rifles they were open carrying at the Capitol. That just makes the troopers look even sillier because they claimed the sight of a handgun caused alarm, but the rifles on the men’s back did not cause alarm? It does not make sense. It is not illegal what these men did, but Texas is still stuck in gun control land when it comes to open carrying. That leads to men getting arrested on ridiculous, trumped up charges even though they were legally carrying. It is time for Texas to really act conservative, and join the many other states who allow open carry.

Below are more of the pictures (from Facebook) and video from the arrests today of Gary Hays, Terry Holcomb and Scott Smith at the Texas State Capitol: 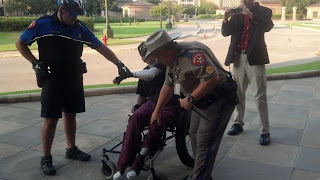 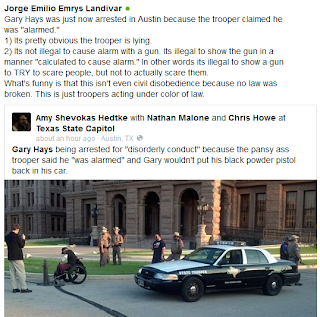