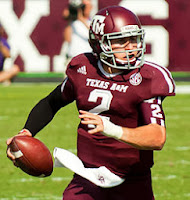 Senate Democrats had planned to use Johnny “Football” Manziel to distract people from the big Obamacare vote?

The cloture vote (vote to end debate) happened today (Friday 9/27/2013). The senate was originally pushing for a Saturday vote. This is the vote that Ted Cruz does not want to pass because when debate it closed, it only takes 51 votes to amend the continuing resolution and add back in funding for Obamacare. Republicans cannot stop Harry Reid from getting 51 votes to amend the bill, so Cruz is standing against closing debate so that way Harry Reid will be forced to allow Republicans a chance to sit at the table and have their voice heard in the Senate.

The U.S. Senate Democrats do not want you to watch and see them vote to fund Obamacare. They do not want you to see them amend the U.S. House’s Continuing Resolution. So what is their grand plan to have the Nation distracted during the vote? Johnny “Football” Manziel is their plan. According to Rush Limbaugh on his 9/25/2013 show, the Senate wants to vote on Saturday instead of Friday because the country will be watching Texas A&M’s Johnny Manziel. That is one of the reasons, according to Limbaugh, that Ted Cruz wants the vote to be Friday instead of Saturday. Texas U.S. Senator Ted Cruz wants the nation to be watching when the Senate votes to fund Obamacare, and if the Senate votes on Saturday then the nation will be watching Johnny Manziel.

The Senate, after being called out by Cruz and Limbaugh, went ahead and had the vote Friday instead of Saturday. As expected, the Senate Democrats immediately voted (and passed) an amendment to fund Obamacare. It is still kind of amusing though to think about the Senate wanting to vote while the country is watching Johnny Manziel, haha.

Johnny “Football” Manziel has mesmerized the nation. This year he seems to be even better than last year, and he won the Heisman Award as a Freshman last year. Every game he plays as quarterback of Texas A&M University, he puts up amazing statistics and is known to wow viewers with spectacular plays against even the best teams. His recent game against Alabama was easily the most watched football games in many years. Most of the audience tuned in to see Johnny Manziel right as he was making a comeback and dancing around Alabama players in order to rally the game to a near tie finish against the number one team in the nation.
Posted by David Bellow Posted at 1:21 AM