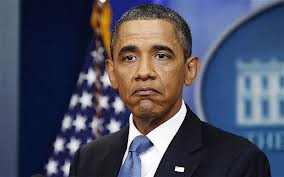 Crossing the line? President Obama sent a partisan/non-factual email to all Federal employees blaming the Republican controlled House of Representatives for the shutdown and claiming that the Senate and the President have nothing to do with the government shutdown. (see Obama's email below)

Federal Workers are not allowed to send partisan/political emails to other government workers using their government email accounts while they are on duty. They do not expect to read any partisan emails either, especially from the government. The government leaders understand this and anything that is sent out is typically always non controversial and non-partisan. That was not the case this week. Imagine the surprise that many federal workers got when they clocked into work and got a partisan email from President Obama blaming the House of Representatives for the Shutdown and claiming that the Senate and President had nothing to do with the shutdown. The email made no mention that it takes three to shutdown the government. The House and Senate and President all have to agree on a budget in order to keep the government going. The shutdown is just as much the Senate's fault for not approving what the House passed as it is the House's fault for not approving what the Senate passed. If you read the email from President Obama you would think that it is only the fault of the House of Representatives because they are not going along with the good plan from the Senate. Oh, and the email made no mention of the threats to veto the House bill. Yes, as much as the President denied his role in this shutdown in the email to all federal workers, the shutdown is just as much his fault because he has threatened to veto everything the House has offered. Also there was no mention of the fact that he, and not Congress, made the decision to shut down the WWII memorial from even allowing veterans to visit it. This memorial does not even need to be "funded" in order to allow people to freely walk to it and look at it.

Below are some of the most outrageous, partisan quotes that Obama sent in a letter to all federal workers via their government work email inboxes: (my comments are in red)

"This shutdown was completely preventable. It should not have happened. And the House of Representatives can end it as soon as it follows the Senate's lead, and funds your work in the United States Government without trying to attach highly controversial and partisan measures in the process." (the Senate and President can also end it as soon as they follow the House's lead. The President forgot to mention that)

"I will continue to do everything in my power to get the House of Representatives to allow our Government to reopen as quickly as possible, and make sure you receive the pay that you have earned." (Ah yes, it is only the House that is not allowing the government to keep running. So the Senate and President have nothing to do with it?)

"more than 50 current or former Federal employees have received the Nobel Prize for their efforts." (Not sure how this has anything to do with the Shutdown, but they also gave war starting Obama the Nobel Peace Prize, so really how credible is one of those awards nowadays?)

"It was grants from the Department of Energy that helped businesses unlock new sources of renewable energy" (like the money given to Solyndra the solar panel company that took taxpayer money and went bankrupt while the executives of the company made millions?)

Click on the document bellow to see the full letter that President Obama sent on October 1st, 2013 to all federal workers. The particular letter below was sent to all Department of Justice workers from President Obama via Attorney General Eric Holder: 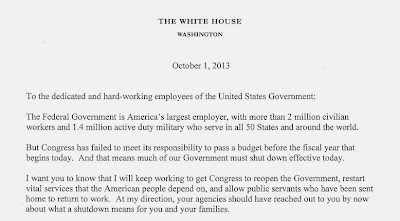 Posted by David Bellow Posted at 1:25 AM