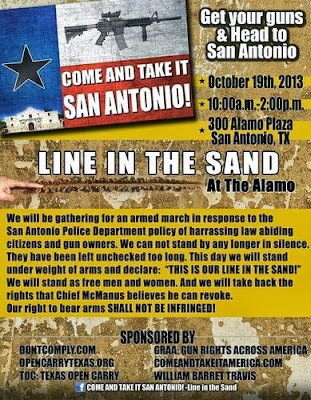 Only in Texas.... well, actually I should correct myself to say that rallies like this only happen in Texas. People open carrying guns happens all over America. Surprisingly, open carrying modern handguns in Texas is illegal even though many other states have some form of open carry gun rights. It is legal to open carry a rifle in Texas though and that is what will happen this Saturday at the Alamo in San Antonio, TX.

The purpose of the rally is to protest the San Antonio Police Department's ticketing of law abiding citizens who openly, and legally, carry their rifles.

Fear is really the only thing that causes people to want to deny law abiding citizens their second amendment rights. The liberal media has trained people to be shocked when they see someone in public with a gun in a holster or over their back. Funny, I have never heard of a shooting at any of these gun rallies or at gun shows. There was just recently an open carry BBQ in Michigan and no one got shot.

Jerry Patterson, the Texas Land Commissioner who oversees the Alamo grounds, will be one of the main speakers at the event.

According to the event flyer:

We will gather for an armed march in response to the San Antonio Police Department policy of harassing law abiding citizens and gun owners. We cannot stand by any longer in silence. They have been left unchecked too long. This day we will stand under weight of arms and declare: "This Is Our Line In The Sand!" We will stand as free men and women. And we will take back the rights that Chief McManus believes he can revoke. Our right to bear arms shall not be infringed!