Dan Branch Tweet Takes Shot at Ted Cruz? Wants Republicans to Give in to Obamacare?

Texas Attorney General Candidate Dan Branch upset many conservatives yesterday over something that he retweeted on twitter. Given the current standstill in Washington, the post from Branch seemed to imply that conservatives, like Ted Cruz, should not stand so strongly against Obamacare.

I suppose I am not surprised. Dan Branch has a long record of teaming up with Democrats to oppose the majority of Republicans and conservatives during his time in the Texas Legislature. That man can NOT become our next Texas Attorney General. He will compromise with Obama in court instead of fighting tooth and nail against him.

Yesterday, Dan Branch retweeted a Ronald Reagan quote "I'd rather get 80% of what I want than to go over the cliff with my flag waving" 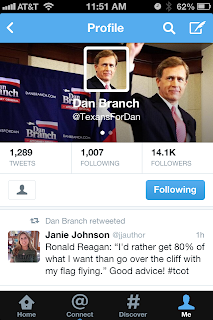 Any other time, in normal debates, this quote would ring true.

These are not normal times though. American is crumbling under an enormous amount of debt and Obamacare might be the straw that breaks the camel's back. Senator Ted Cruz and House Republicans have taken a stand against Obamacare in order to save America. The Republicans have even offered reasonable compromises like just delaying it for a year. The Democrats are not budging so that has led to a "government shutdown" which is really just a government slimdown.

Given the current government situation and the timing of the retweet from Branch, some believe that it was a jab at Ted Cruz and other conservatives who are holding the line against Obamacare. It would seem that Branch might want conservatives to give in more in order to end the shutdown. Branch is wrong though. Standing against Obamacare is not going to end with Republicans going off a cliff with our flags waving. Fighting Obamacare till the end will save America from the cliff that she is sure to go over if Republicans DO give in. So stand strong Ted Cruz and fellow conservative Republican Congressmen.

If Branch meant something else by the retweet then it sure needs to be clarified because many people saw it as invoking conservative hero Ronald Reagan as a plea to conservatives to give in to the Democrats instead of "going off of a cliff" while completely opposing Obamacare, even though the cliff is what standing against Obamacare is saving us from!

This kind of statement sure fits in with Branch's history of compromising conservative values. If you remember, Dan Branch was a member of the original gang of 11. These 11 Republicans teamed up with all of the Texas Democrat State Representatives to kick out the Republican House Speaker and pick a more Democrat friendly, pro-choice, moderate House Speaker Joe Straus.

I personally support Barry Smitherman for Texas Attorney General. He is a proven conservative statewide leader who has shown that he will stand for Texas and fight Obama without backing down.
Posted by David Bellow Posted at 10:08 AM