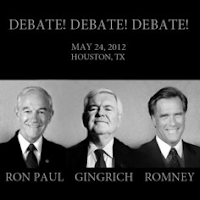 Update: Petition now has over 5000 signatures!

This past weekend at my County Convention in Hardin County, TX, I was pleasantly surprised when a young woman from my county,
Chelsea Willis, approached me and said she had a petition with over 3000 signatures on it. The petition was to try to persuade Mitt Romney to come to a Texas Republican Presidential Debate. The petition is titled "Potential Nominees, attend the GOP Debate (Houston, TX on May 24th, 2012)"

In recent years, Texas has had little say in the Republican Presidential Race. The Texas GOP tried to put Texas on the map by getting together a debate on May 24th in Houston, TX. Mitt Romney was the only candidate to snub this Texas debate.

Even with Santorum suspending his campaign (dropping out of the race), Chelsea knew that the race was not over and many states still have not voted, so on April 14th Chelsea sprang into action by starting an online petition in support of this Texas debate with Gingrich, Paul and Romney. The petition specifically urges Mitt Romney to attend.

Since the start of the petition, Gingrich has also announced he suspending his campaign (dropping out)

Although it now seems unlikely that any other Presidential candidate other than Mitt Romney will get the Republican Nomination, it is encouraging to see that even regular voters in little Texas counties are standing up and trying to make a difference. Getting over 3000 signatures is pretty impressive for this rather low-key controversy.

Even with just Ron Paul and Mitt Romney left in the race, the point is to show Romney that Texas does not like being ignored, so I encourage everyone to go to this link and sign the petition http://www.change.org/petitions/mitt-romney-debate-ron-paul-houston-tx-on-may-24th-2012

Below is a personal letter from Chelsea Willis regarding her petition:

I created a petition titled "Potential Nominees, attend the GOP Debate (Houston, TX on May 24th, 2012)" because I care deeply about who becomes the GOP nominee.

I understand that the SREC has received a commitment from a major television network to televise the debate, and that the remaining GOP nominees, except Romney, have pledged to be at the debate. In addition, it is my understanding that the SREC passed a resolution that intensely urged the uncommitted nominee to attend the Texas GOP Presidential Debate. In response, I have created an online petition to encourage Romney to debate Gingrich and Paul. The ultimate purpose of the petition is to gather constituent support for the debate, and I could really use your assistance in getting out the word. A substantial number of signatures will convince the uncommitted nominee that attending the debate is in the best interest of his campaign.

It will just take a minute!

Once you are done, please ask your friends to sign the petition as well. Grassroots movements succeed because people like you are willing to spread the word!

Sincerely,
Chelsea Willis
Posted by David Bellow Posted at 4:52 AM