There have been 1954 U.S. soldiers killed so far in the Afghanistan war according to icasualties

WHY NO MEDIA OUTRAGE?

I remember when Bush was President the Liberal Media stations and news outlets had daily updates of the number of U.S. Soldiers killed with pictures and everything. Now It is almost hard to find out how many soldiers are dying every day because when a soldier dies now it is not on the front page or sometimes not even reported at all.

I am not going to get into any discussions of whether or not wars are right or wrong. The point of this blog post is to show that the media is clearly showing their bias and hypocrisy by no longer Bashing Obama over the deaths like they bashed Bush.

THE MEDIA IS PROTECTING OBAMA

The media apparently does not care about the Soldiers or about how many were dying. If they did then they would have continued attacking Obama over the rising U.S. Soldier death toll.

The media only reported those death numbers under Bush because they wanted to try to indoctrinate the general public with negative views of Bush. Now that Obama is in office, they are backing off and trying to protect him from negative attention from the rising U.S. Soldier death toll.

Over twice as many U.S. soldiers have died in Afghanistan under Obama in 3 1/2 years than did under Bush in 8 years! Have you heard any major news station of media outlet say that? When is the last time you even saw a death toll number with made up milestones?

Where are all of the anti-war protesters now? Why no big rallies?

This tells me that these groups and the media never really cared as much about the deaths of the soldiers as they cared about just hating Bush and trying to make him look bad. 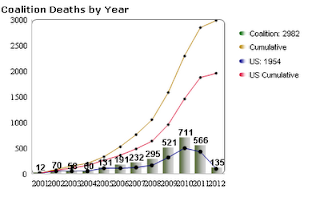 Not only is the media protecting Obama, they are also giving him credit for things that Bush did.

For instance, Bush policies and actions led to Osama Bin Laden getting found. Waterboarding a Guantanamo Bay terrorist resulted in the tip that eventually let to Osama Bin Laden. Obama was against waterboarding and Guantanamo Bay so if Obama had his way, we would have never gotten the tip in the first place. Obama just happened to be President when Bush Policies came through! New memos show that an Admiral was the person who came up with the plan and made the tough decisions, Not Obama. The memo even shows that Obama was likely going to blame the Admiral if things went bad and Osama was not there.