A couple of weeks ago I received an email about a petition drive in Houston, Texas. The petitions are aimed at ending the Sanctuary City policy in Houston and also require E-Verify to be used in Houston.

There petitions require 20,000 signatures each by about late summer 2012 in order to get on the ballot. If they make it onto the ballot and the people of Houston vote in favor of them, they will become a part of Houston's City Ordinances and Regulations, regardless of whether or not the City Council approves of them or not.

Houston has especially been hit hard by illegal immigrant crimes with recent murders of Houston Police Officers by illegals. These illegals who killed police officers would likely have been deported before they could kill if Houston Police Officers were allowed to check the citizenship status of people who they arrest. I have to show my ID when I get pulled over, I do not see why it would be discriminatory to check the citizen status of people who get arrested or pulled over for an infraction not related to their race or ethnicity.

Below is the information I received about this Petition Drive: 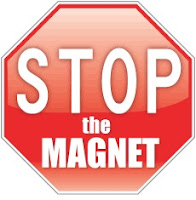 Stop the Magnet is a petition drive effort seeking 20,000 City of Houston registered voters to help deter the detrimental effects of illegal immigration in our community.
The “magnets” of jobs and operating under the radar in our city encourages criminal behavior and the ability to set down roots in our community.
We are offering two ballot proposals to help keep American citizens in the workforce and a proactive policy for our Houston Police officers to check the identities more fully where no valid identification is presented in a probable cause encounter.
We believe it is an outrage that our heroic fighting forces are called out to fight for freedom around the world while at home in the United States our borders remain wide open and the costs are borne by hard-working
American families. How can one justify all the blood spilled for our nation in the name of freedom and justice that is now abandoned to economic interests over security and the rights of citizens? Let us not allow our country to be given away by inaction leaving the next generation to wake up with no country to call their own!
This is a call to action. We need to garner 20,000 registered City of Houston voters to sign our two proposals and allow the voice of the people to speak on this issue.
Please assist us by considering signing up for our 30 & 3 volunteer program. Locating 30 City of Houston signers and donating 3 hours at the polls during Election Day or Early Vote during the primaries. Should 200 patriots in the Houston area step up to the plate we can obtain ¼ of the needed signatures and obtain many more during the elections, combined with other signature-gathering efforts at City events and mail-outs. Please help us by volunteering for the 30 & 3 hour program. Contact mary@stopthemagnet.com. Download petitions at: http://www.stopthemagnet.com/
Please help save our country by acting today.
go to www.StopTheMagnet.com to read the petitions, for info on how you can sign the petition, and for more info on how you can help get signatures to get these issues on the ballot.
Posted by David Bellow Posted at 11:36 AM