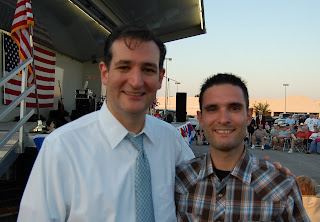 The following is a letter that I received from Ted Cruz in which he outlines his jobs and growth agenda if he wins the 2012 Senate Race.
I encourage everyone to research all candidates and choose your own candidate. I have seen or researched every candidate and I personally support Ted Cruz for Texas United States Senator. There are many great candidates, but Ted Cruz has the most rock solid, proven record to back up his beliefs so you don't have to wonder if he is just saying something to get elected. He has the ability and the guts to stand up and not compromise. He has even fought for conservative principles in the United States Supreme Court and won cases like keeping the 10 commandments at the Texas Capital, keeping God in the Pledge, and winning a State's Rights case against Obama! Those victories do not even scratch the surface of Ted Cruz's Proven Record and Conservative Victories.
Ted Cruz has received huge endorsements from Strong Conservatives like Senator Rand Paul, Senator Jim Demint, David Barton Founder of Wallbuilders, and Former Chairmen of the Republican Party of Texas. He has also received endorsements from FreedomWorks, Utah Republican Senator Mike Lee, Red State and the Club for Growth — as well as the affirmation of conservative heavyweight and radio talk show host Mark Levin.
Letter from Ted Cruz on his Jobs and Growth Agenda:
This week—nearly three years into his presidency—President Obama will propose his long awaited “jobs agenda.” Unfortunately, it will likely consist of yet another re-hash of the same big-government “stimulus” programs that have consistently failed to generate jobs.

And the Obama Administration has waged an unrelenting war on jobs, perhaps not deliberately, but out of an ideological zealotry and dedication to big government and central control of the economy.

As a result, our economy languishes and millions are unemployed. Historically, growth in the U.S. has averaged roughly 3% per year. In 2011, we are at 0.7%—one quarter the historical average. And unemployment is 9.1%, the highest in 28 years. If you count discouraged workers, unemployment is at 16.1%—which means 25.1 million Americans are tragically out of work today.

The federal government is addicted to regulation and spending. No domestic policy matters more than stopping the Obama Administration’s war on jobs, and unleashing the private sector to create growth and new jobs.

As a candidate for U.S. Senate, I propose 12 specific steps. The first six are defensive, stopping the Obama war on jobs, and the next six are pro-active, unleashing the private sector:

1) Repeal ObamaCare. This Administration, over the vocal opposition of a large majority of the American people, jammed through a 2,000-page bill that puts us on the path to government control of 1/6 of the economy. If ObamaCare stays in place, it will wreak havoc in the healthcare industry, reduce care levels, increase scarcity, and put government bureaucrats between patients and their doctors. And, the massive cost and uncertainty it has imposed on small business is crippling job creation. My first bill in the Senate will be to repeal every word of ObamaCare.

2) Kill Cap and Trade. The Obama Administration has relentlessly pushed, in cap and trade, the largest energy tax in history, which would take thousands of dollars from every family in America. Unable to pass it through Congress, the EPA is attempting to bypass Congress and force cap and trade on Americans by adopting back-door regulations. We must stop both efforts now.

3) Stop the National Labor Relations Board from Attacking Jobs in Right-to-Work States. Currently, the NLRB is trying to force Boeing to fire thousands of workers from its factory in Charleston because South Carolina is a right-to-work state. Incredibly, the NLRB’s position is that, if Boeing closed the plant and moved all the jobs overseas, that would be fine, but it cannot employ U.S. workers in manufacturing jobs unless they are subject to union bosses and pay mandatory union dues. This makes no sense, and must stop.

5) Restrain Abusive Environmental Enforcement. Currently, the Obama Administration is using the alleged presence of a lizard to try to stop oil and gas exploration in West Texas. Even more ominously, the EPA has launched “investigations” into hydraulic fracturing, a long-used drilling process that has recently unlocked vast new reserves in both natural gas and oil. These new American energy reserves are poised to create countless new jobs and drastically reduce our dependence on foreign energy supplies. But if the Obama Administration succeeds in banning hydraulic fracturing, tens of thousands of jobs will be lost and America will be left even more dependent on foreign dictators for our energy needs. We can and should vigilantly protect clean air and water while aggressively developing these new resources and new jobs.

6) Repeal Dodd-Frank. A law of massive complexity, Dodd-Frank does nothing to prevent future financial bailouts, but instead subjects the financial sector to costly new regulatory burdens—the cost of which invariably will be passed on to consumers. And its impact hits small community banks hardest. Reasonable government regulations are needed to protect the soundness and integrity of the marketplace, but they should not empower bureaucrats to micro-manage private sector institutions to the detriment of consumers.

7) Slash Corporate Tax Rates. Right now, U.S. corporations face the highest tax rate in the developed world, and they face double taxation if they invest their profits in America. As a result, American companies are today keeping over $2 trillion overseas. With over 25 million Americans out of a job, a tax policy that punishes new U.S. investments and factories is utterly nonsensical. We should cut corporate tax rates—to 15% immediately—to spur new investment and create new jobs in America.

8) Champion Tax Reform. The tax code is too complicated, the IRS too powerful, and lawyers and accountants too expensive. We should dramatically simplify the tax code and move as close as possible to a flat tax or to the Fair Tax.

9) Cut the Federal Budget and Reform Entitlements. Our federal budget is out of control, and broken entitlements are the largest portion of that budget. Under President Obama, federal debt has grown by over $4 trillion. At this pace, Obama will dump more debt on the American people than any other President in history. We need serious federal spending cuts—real cuts, not just decreases in the rate of growth—and fundamental entitlement reform to resolve the ever-growing debt crisis.

10) Rein in the Fed and Ensure Sound Money. Congress should pass Rep. Ron Paul’s bill to audit the Federal Reserve—so that it is subject to basic principles of accountability and transparency. We then should restrain the Fed’s “quantitative easing”—a fancy term for printing money—so that our currency isn’t further debased. Since 2008, gold has skyrocketed and the value of the dollar has plummeted creating a cruel tax on every consumer, saver, and investor. For long-term growth, we need sound money and a strong dollar.

11) Allow Small and Medium Companies To Opt out of Sarbanes-Oxley. Today, American businesses spend twice as much complying with needlessly burdensome regulations than they spend on income taxes. Complying with the audit requirements of Sarbanes-Oxley alone costs nearly $100,000 per business per year, a crushing burden for privately held startups seeking to go public. Since Sarbanes-Oxley, new listings on American stock exchanges have plummeted. We should at a minimum exempt small and medium-businesses from the unnecessary audit requirements of Sarbanes-Oxley, to restore an historic pillar of America’s prosperity: access to affordable public capital to expand businesses and create jobs.

President Obama’s speech this week will undoubtedly contain everything except what would actually create jobs, namely stopping the government’s war on the job creators. Obama’s vision of government treats entrepreneurs as the enemy in taxation, in spending, and in regulatory burden. For 25 million Americans and counting, the Obama agenda simply doesn’t work.

From now until the election, I will be talking every day about how economic freedom and limited government are the keys to liberty, prosperity, and job creation. If we remove government barriers to economic growth, and unleash private sector innovation, jobs will follow. It’s time to get America working again.

Ted Cruz served from 2003-08 as the Solicitor General of Texas. He is a Republican candidate for U.S. Senate in Texas. Learn more: