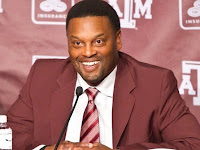 During the 2011-2012 Season, there were coaching changes at 12 major Universities (BCS Football Schools)

Texas A&M University was the ONLY school out of those 12 to hire a black head coach.

Texas A&M Hired Coach Kevin Sumlin who was, at the time, the head coach at the University of Houston.

Since the Aggies were the only major university to hire a black head football coach last season, you would think the Aggies would get an A on the Football Hiring Report Card from the Black Coaches and Administrators right?

Texas A&M University got an "F"

That is right. Texas A&M got an F because they chose not to participate in the racist survey from the Black Coaches and Administrators. You know, the kind of survey that tries to twist your arm into agreeing to try to hire minorities using racial quotas instead of hiring using qualifications. The kind of survey where you are labeled as racist if your survey results show that you don't hire enough minorities. The kind of survey that labels you a racist if you did not interview a large percentage of black coaches, 30% or more of the total number of people you interview, even though 1) you opened the position up in a fair manner to people of all races and you can't help it if not many black people apply, and 2) black people only make up 13% of the total population in America. The kind of survey that labels you a racist if, when you hire, you hire based on qualifications with no consideration for color of skin. Martin Luther King Jr. dreamed of a world where color of skin would not be a factor in America. He lived in a time where it was racist because they used color as a factor in whether or not to hire someone or let them sit on a bus, and yet, today you are labeled a racist if you DO NOT use color as a factor in hiring. You are now a racist if you just want to be color blind and judge people based on qualifications. Am I wrong here or aren't the Black Coaches and Administrators the racist ones? I mean can you imagine an organization "White Coaches and Administrators" releasing reports giving people failing grades for hiring too many minorities? That would be considered racist right?

The Black Coaches and Administrators report giving Texas A&M an "F" proves that the BCA is racist and has an ulterior motive. Their report does not care that you ACTUALLY HIRE BLACK PEOPLE AND JUDGE PEOPLE FAIRLY BASED ON QUALIFICATIONS, otherwise Texas A&M would have gotten an "A". Instead, the report is a way for the BCA to promote an agenda of judging people with race as a part of the factor. Oh, and if you don't submit to their blackmail (being called racist if you don't take the survey and agree to their mission in the survey) then you are labeled a racist anyways for simply not taking the survey even though the BCA can clearly see that you are not racist because you are the only major school last year to hire a black head football coach.
Posted by David Bellow Posted at 5:11 PM