The San Antonio Federal Court over the redistricting lawsuit has declared that Texas will not have a Primary Election before May 29th, 2012. We have been told to plan for an election on May 29th but that we could also have it as late as June 26th, 2012.

The only option that we have is to not tie the convention process tied to the Primary Election night.

We will have to go ahead and have the Precinct and County Conventions (maybe even the State Convention) BEFORE we have the Primary Election.

the State Republican Executive Committee will be having an emergency meeting (via telephone) with the RPT Chairman, Steve Munisteri, sometime in the next couple of days. We will then have an emergency meeting in Austin to vote to approve a new process. We will be coming up with a new convention/delegate selection process and timeline. We then have to present what we come up with to the 3 Judge San Antonio Federal Panel.

As soon as we come up with something, this information will be pushed out to everyone.

If anyone has any comments or suggestions for the SREC regarding a new process, please email me with you idea and I will pass it along.

Below is the latest update from the Republican Party of Texas:

This afternoon, the San Antonio three-judge panel indicated that the April unified primary election will be postponed and that it was probable (but not a certainty) that the new primary date will be May 29th. As previously reported, on Tuesday, county clerks and elections administrators testified that they need 88 days of lead time to prepare for a primary election from the date that new district maps are issued. Today at the hearing, the Texas Secretary of State's office indicated that this timeline could be shrunk to 77 days and reduced even further if military ballots were accepted for a short period of time after the primary.

Consequently, new maps need to be in place sometime between early and mid-March in order to maintain the May 29th primary date. 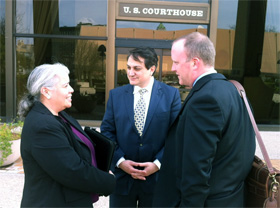 Chairman Munisteri discussed with the Court the problems a May 29th primary creates for the party's delegate selection process for the RPT State Convention. He reiterated that it is impossible to comply with the current Texas Election Code as it pertains to delegate selection, with the primary on May 29th and the State Convention in the first week of June. He strongly urged the Court to issue an order that would allow the State Republican Executive Committee to adopt a new delegate selection process which varies from the Election Code. He told the court that if there is sufficient time for planning, that in consultation with party leadership, he had several different options in mind which: would allow district conventions to still occur on schedule, allow for a May 29th primary, and still allow for a convention the next week. In general terms, he suggested different options which would completely de-couple the selection of delegates to the State Convention from the primary election.

The Court indicated it was very likely that they would grant such a request from the State Party, provided it received U.S. Department of Justice pre-clearance. Chairman Munisteri made the case that DOJ pre-clearance is not required in a case where the changes are made as a result of court order. However, the Court indicated that they thought it was a safer route to obtain pre-clearance. A Department of Justice attorney testified that his office would expedite such a request and anticipated that the approval time could be reduced from a couple of months to a couple of weeks, thereby allowing the change to occur.

The Court instructed both political parties to consult on a new schedule for a May 29th primary. It also invited the state parties to put forth separate proposals as to how they would select delegates and conduct their conventions. Chairman Munisteri is hoping to hold a telephone conference with members of the Republican Party of Texas Officials Committee tomorrow to go over various options. He plans within the next few days, to have a separate telephone conference with the entire SREC to go over recommendations from the Officials Committee. It is his hope that a consensus plan can be agreed upon by the SREC. If this is accomplished, he will distribute this plan to all County Chairmen to obtain their input, and then once a final plan is agreed upon - to propose the plan to the three-judge panel in San Antonio.

It is the Chairman's goal to develop a process around existing Senatorial and County conventions so as to minimize inconvenience and logistical problems. It remains his objective to keep the State Republican Convention scheduled as planned during the first week of June. We will provide further information over the next few days as to developments in this regard.

Also on Wednesday - Chairman Munisteri, RPT lawyers and staff spent another day in the courtroom listening to final arguments in the redistricting case. It appears as though there is an agreement between the Attorney General and the Democrats on a new Texas State Senate map. As soon as we have full details, we will provide them to you - but it is expected that the final lines will make it possible for a Republican to win the district in controversy, SD 10, although not a certainty.

With regards to the Congressional districts (discussion of which took up most of the day) the prime battleground appears to be over CD 33, 25, 23, 35 and 27. Of particular concern to the Republican Party of Texas is CD23, which is represented by Congressman Quico Canseco. General Abbott's map is roughly equivalent to how that district was configured before redistricting, while the Democrats are pushing for an increase of Democrat voters there.

There was also a big argument with the Democrats over CD 25, currently represented by Lloyd Doggett. Travis County and other Democratic plaintiffs are arguing that the district should not be converted to a Republican district, since in their opinion the district is protected under the Voting Rights Act - General Abbott's team disputes this. There are also several different proposals regarding Congressional District 33 in Arlington. Additionally, Congressman Joe Barton's legal team (led by former State Representative Joe Nixon) argues that the configuration of that district in the Attorney General's compromise proposal is not allowable under current legal standard. At the end of the hearing today, there was also no agreement on the Texas Congressional map.

Chairman Munisteri issued the following statement regarding today's proceedings. "I am disappointed that the San Antonio three-judge panel again delayed the Texas Primary Election. The Secretary of State's witness today indicated that if the panel would issue maps within the next few days - that an April 24th primary could still be accomplished. However, now that it is apparent that April is out, the RPT will continue to fight to oppose any further slippage in the primary schedule. We will work hard with our Party leadership to come up with a plan to preserve our State convention."

Special Advisory to all Republican county chairmen, precinct chairmen, and party activists from Chairman Munisteri - I am hopeful that the SREC will come up with a plan for the three-judge panel that will still allow district conventions on the date scheduled. Therefore it is our advice that you not cancel your plans to go forward with district conventions until otherwise instructed. I am hopeful that within the next week or so, that we will have a telephone conference with all county chairs to provide them more information on any proposed plans. The RPT is committed to working with each of you to come up with a workable solution to this unprecedented challenge. Thank you again for your patience and hard work.