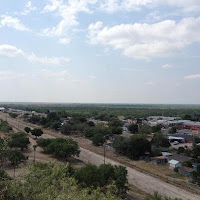 I spent the last few days down on the Texas/Mexico Border. One of my brothers got married to a Hispanic woman down here so we all came down for the wedding.

We had a great time down here and I got to talk to a bunch of new family members. Some of the small talk we had of course wandered into the topic of border violence and life on the border. I have written many articles about this topic because I am very worried about the situation down there. I always love hearing stories from people who actually live down there, especially Hispanics. People who do not live down there need to know these stories from people living there. For some reason the media has never really fully covered all of the violence and corruption that is happening right here in America because it has spilled over from Mexico.

I am of course not going to list any names or locations because, well, these people live down there and, as some of you know, drug cartel members like to kill people down there for small things like anti-drug cartel tweets. This is what the border residents who I talked to had to say:

Kidnappings are a Common Occurrence

Kidnappings happen on both sides of the border and they happen all the time. One man I talked to said that just a few months ago his grandmother's 3 brothers were kidnapped. His grandmother lost everything, even her ranch, trying to get them back. 2 of them were released back. One of them died.

I know that there are some very good law enforcement officers down here risking their lives for what is right, but I was not surprised to hear that there was corruption down here among some of them. Drug Cartels pump their money into elections to elect people friendly to them. I was pretty surprised to hear how rampant this corruption is though. Apparently, just in the one Texas County I was in, 3 different people recently elected as Sheriff for this county have been arrested for all kind of things from drug smuggling and even murder. Their jail time was minimal and one even got only house arrest.

Also, one man I spoke to was a paralegal and he said it is not out of the ordinary for him to be in court and see the District Judge tell a cocaine dealer to just don't do it again.

It is normal down there to wake up in the middle of the night because of explosions and Drug Cartel gun battles. These massive battles happen all the time right on the Mexican side of the border, and many of them even spill over the border resulting in bullets coming over here and law enforcement having to respond to push back the violence that has crossed over during a battle. Battles are not the only type of violence that has spilled over. There and numerous murders and drug cartel killings that happen right here on the American side because the Mexican cartels are continuing to expanding their business (even entire operations) to our side of the border.  These drug cartel leaders are even easy to spot. One woman I talked to said she saw a man get into his SUV at Target. He had a dozen men surrounding him as he got into his SUV and they saw when the SUV opened the back door that the SUV had been bullet proofed.

And of course there are the mass murders. Thousands of murders that are happening each year. Many are gruesome with people getting their heads cut off and their limbs torn off. More people have died in drug cartel mass murders in the last year than the total of soldiers who have died in the Iraq and Afghanistan wars over the last decade. It is a bloodbath down there and some cities cannot even have a Police Chief for more than a few days before he gets gunned down.

One Hispanic woman told me that something needs to be done about all the free money that is going to illegal immigrants to pay for everything from food to healthcare. She said that all an illegal has to do is have a kid over here and then they automatically get free money from us. She said that it really bothers her when she sees people who she knows to be an illegal immigrant living the good life off of food stamps. She works hard but cannot afford to buy expensive food. Her kids will be in line at the grocery store and they will see illegal immigrants who are well fed with large baskets of expensive food items like steaks. Her kids will ask her why they cannot eat food like that. The people with the expensive food will then pull out a lone star card and pay for the food using our tax money. She says that people getting fed by the government should only be allowed to get basic foods and if they want the good food then they need to get a job to pay for the good stuff.

This woman went on to tell me of all the different times she has seen illegal immigrants commit food stamp fraud. One man at the grocery store tried to buy dog food with food stamps. The cashier told him that he could not get dog food with a star card. The man got angry and did not believe it. He then told his son to just go get some fajita steak meat that they would cook and feed the dog with. Then there was another man who was having a party. He wanted to get booze for the party so he got someone in the store who was buying expensive food and he paid for their food with his lone star card and in return the other people used their cash to buy him the beer.

Hispanic Americans want the Border to be Secured and a Crack Down on Illegal Immigration that is Draining our System and Money. Some Suggested a type of Guest Worker Program.

One person who I talked to said that about 11 years ago they knew of Mexicans who were cleared as non criminals and were put on buses every day and brought into America to work then went back home at night. They did not try to sneak over here live here or try to drain free money from the government. They just came and worked and went back to Mexico. This person I talked to suggested that there would be much less of a problem with illegal immigrants coming over here and draining our system if we secured the border and then gave the Mexicans who just want to work the ability to live in Mexico and just cross the border legally to come work in a legal, tax-paying capacity and then the go back home to Mexico every night. She said that many of the illegal immigrants here now would go back to Mexico with their family if they were allowed to just come over every day to work and go back home at night. The Hispanics down here that I talked to are against Amnesty from what I could tell, but they do believe that something needs to be done to allow people to come here and work because they say that it would really help with the illegal immigration problem with the people who just want to work. They of course were against anyone becoming citizens without going through the process like they did. They were also of course in favor of securing the border to keep the bad guys from coming over. They did not want free handouts given to people and in fact it ticks them off when they work hard to provide a living and then see illegal immigrants get free stuff. They did not want any Americans, like them, to be put out either so they would want jobs to first be offered to Americans. They did say though that would like to see some kind of guest worker program implemented and the government to crack down on the drug cartel violence and corruption.

Posted by David Bellow Posted at 8:42 AM