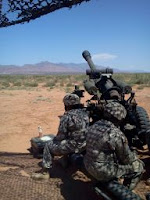 Over 35 vehicles belonging to U.S. Soldiers were stolen or vandalized this past week at the Army National Guard Armory on Westheimer Parkway in Houston, TX

I encourage the local media to bring attention to this targeting of Texas Soldiers so that the thugs who are doing this will be brought to justice.

Help Us Catch the Thugs!

Over the last 2 weeks, myself and hundreds of Houston area Texas Army National Guard Soldiers drove nearly 1000 miles one way in a military vehicle convoy to get to Dona Ana Camp in New Mexico (just north of El Paso, TX). It was our Annual Training. The Battalion that I am a Sergeant in, HHB 1/133rd FA, is a Field Artillery Unit. We camped out in the desert for 11 days and part of our Battalion mission was to shoot three thousand 105mm rounds into a nearby mountainside.

While we were away training, thugs vandalized and/or stole at least 35 vehicles belonging to my fellow U.S. soldiers at the Houston, TX Armory on Westheimer Parkway. Many of these soldiers have deployed to Iraq and/or Afghanistan multiple times. Thankfully, the armory that I was parked at on W. Rankin Road in North Houston was not hit by these thugs.

I encourage anyone with knowledge of who did this to please call the local authorities.

I encourage the local media to bring attention to this targeting of Texas Soldiers so that the thugs who are doing this will be brought to justice.
Posted by David Bellow Posted at 8:45 PM