Texas Supreme Court to Decide if an Unborn Baby Should get Medical Care Before Paying Court Costs, and if a New Pregnancy is a Change in Circumstances re: Access to Justice

Texas Supreme Court to Decide if an Unborn Baby Should get Medical Care Before Paying Court Costs, and if a New Pregnancy is a Change in Circumstances re: Access to Justice
click here for story on Texas GOP Vote: https://www.texasgopvote.com/family/texas-supreme-court-decide-if-unborn-baby-should-get-medical-care-paying-court-0012162 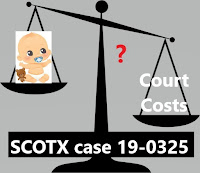 by David Bellow
The Supreme Court of Texas has a case before them right now, Case 19-0325, which if they deny the petition, the Texas Supreme Court will have effectively agreed or let stand a ruling by the Texas Ninth Court of Appeals that a pregnancy is NOT a change in financial circumstances. Even worse, if the Texas Supreme Court denies this case, then it will be agreeing or letting stand an absurd determination that the health and health expenses of an unborn baby are not important nor necessary, and that the courts should require unborn babies to be denied medical care so that court costs can first be paid in order to access the justice system and file an appeal. It would also muddy the waters regarding access to justice and standards for inability to afford costs that the SCOTX has pushed to try to clear up in recent years.

This case before the SCOTX is very important for multiple reasons. The first reason is pretty obvious. It is absolutely absurd that an appeals court in Texas has determined that a pregnancy is not a material or substantial change, and that medical expenses during a pregnancy are NOT IMPORTANT and instead the courts should get their access to justice fees paid first before the medical needs of an unborn child can be paid for or risk being denied equal access to courts and justice.

The second reason this case is important is because it involves access to Justice. The Supreme Court of Texas has spent considerable time and effort in recent years taking a stand and fighting FOR access to justice, which is a fundamental constitutional right. Particularly, the SCOTX has created rules and developed case law through rulings aimed at forcing courts to allow people the right and opportunity to access courts and access justice even if they are unable to afford court costs. This is a big shift, as previously the standard was ability to pay, not ability to afford. The SCOTX realized that just because someone has $10 in their account that doesn’t mean the $10 is available to spend on court costs if, for instance, food and housing needs to be paid first. Therefore, the standard shifted to ability to afford, which required courts to actually examine someone’s income AND expenses before determining if someone can actually afford court costs after necessary expenses. Unfortunately, many lower courts still haven’t come on board with the new rules regarding access to justice or they are simply openly defying the guidance from the SCOTX. This case is a prime example of complete disregard for access to justice and the standards for determining ability to afford that have been set forth by the SCOTX.

So, what exactly is this current case before the Supreme Court of Texas? Here is what happened. An appeal was made to the 9th Court of Appeals in Beaumont, TX (Jefferson County). An affidavit of inability to pay court costs was included so that the appeal could move forward even though there was an inability to afford the thousands of dollars in court costs to file an appeal of the trial court ruling. The appeals court kicked the ability to afford decision to the trial court. The trial court, without ever examining or even considering necessary expenses, determined that there is an ability to afford the thousands in court costs. This determination was challenged in the appeals court because, based on the rules and caselaw and plain common sense, there cannot be a determination regarding ability to afford without having looked at expenses and making factual determinations regarding both income and expenses. Additionally, since the appeal was filed there was a new pregnancy with new unborn baby medical expenses that must be considered and paid first before court costs. The Ninth Court of Appeals then ruled that the trial court did not need to examine expenses or that the appeals court didn’t care if the trial court didn’t examine expenses before making a determination on ability to afford court costs. Additionally, the Ninth Court of Appeals rejected a motion regarding a change in financial circumstances due to a new pregnancy and went on to specifically state in their final order to pay court costs that there had not been any material change in circumstances presented that warranted review, which effectively declared a new pregnancy as not an important change to consider. Even worse, it deems unborn child medical expenses as not worth examining and the unborn child expenses should come second to paying court costs. The Ninth Court of Appeals then went on to dismiss the proceeding without ever reviewing the merits of the case due to the thousands of dollars in access to justice court fees not having been paid despite the courts never having actually reviewed ability to pay, and after having determined that court fees come first before necessary unborn baby health expenses.