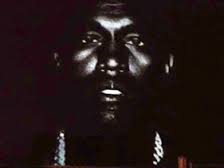 Apparently rapper Kanye West was going to project a video onto the Alamo. The video would be of his music video "new slaves." The video being horrible because Kanye West actually tries to sing, he is racist, he calls people niggas, he talks about raping people's rich wives, and he curses and uses obscene vulgar language. Besides that, the video is also hypocritical because he bashes corporations who get money from the people and make them "new slaves," but at the same time Kanye West has built his own corporation and tries to get people to think and dress like him while he rakes in their money.

The Texas Nationalists were not going to allow this thug to project Kanye's trash onto the Alamo so they alerted the authorities and then rallied together peacefully at the Alamo and drove away the Kanye West crowd.

According to the Gonzales Cannon:

Controversial rapper Kanye West’s attempted publicity stunts around Texas over the weekend likely taught him something that residents of the Lone Star State have maintained for years: “Don’t mess with Texas!”

In particular, don’t mess with the Alamo.

West sent out a Tweet on Friday afternoon announcing plans to project his latest video, “New Slaves,” onto the walls of a number of landmark and historic buildings in Houston and San Antonio over the weekend, but things didn’t go as advertised.

The Tweet was picked up by members of the Texas Nationalist Movement, who in turn contacted the Texas General Land Office and the San Antonio Police Department. The Land Office, which is the state agency responsible for overseeing the Alamo, provided more than a dozen additional park police for the announced 11:30 p.m. Sunday showing, and SAPD had dozens more roving the streets around the shrine.

“SAPD told me they stopped the projection van several blocks away,” said Nationalist Chris Jacka of San Antonio, who is part of the organization’s “Alamo Guard” which holds a wreath-laying ceremony there each month. “They said they told the guys in the van this is not going to happen.”
About 20 Texas Nationalists showed up at Alamo Plaza to lodge their protest against what they considered disrespect of the shrine — including one man, John Vermillion, who made the trip all the way from Rockwell, near Dallas.