Democrat Candidate for Silsbee Justice of the Peace

Did You Beat Your Girlfriend?

In March 2010, the Beaumont PD Investigating Officer for Case# 2010003686 requested an arrest warrant for Thomas Tyler Jr. for allegedly breaking into his former girlfriend’s house and beating her in the face with a closed fist.
It is America and anyone has the right to run for office, but before people decide who they will vote for you need to explain your actions to the Silsbee voters. These are not minor speeding infractions. THIS IS ASSAULT.

Also, was that you patting the New Black Panther Party's Quanell X on the back when he was screaming about burning down a city because a man crashed his car, was on drugs, fought the police and was tazed and because of the drugs he died.... Do you advocate burning down Lumberton or were you just patting him on the back because you wanted him to move out of your way so you can pass by?

Here is the actual police report:

This was not easy for me to post about Tyler. I ran for office and I know how bad the lies about candidates can be because I had lies made up about me. I personally spoke with a couple officers at the Beaumont PD who were involved in this and they really do believe Tyler did this and are upset it was swept under the rug for no reason with so much evidence that Tyler did this. Only after talking with Beaumont PD did I decide that the people need to know about this because Tyler is running for public office. 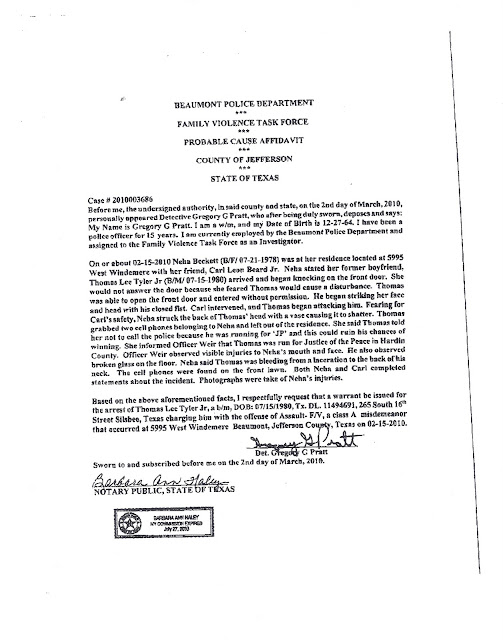 Posted by David Bellow Posted at 9:09 AM