Document released by the Jefferson County District Attorney’s office show that the heads of all DA departments met with DA Bob Wortham and determined that Investigator Marcelo Molfino was to be terminated for lying, among other violations, and they found him to be unfit to serve as an officer of the court.

This DA Office Memo shows Marcelo Molfino was to be Terminated for Lying, Wage Theft, Violation of Policy, and Being Unfit to Be Officer. This is after a multi-year investigation by David Bellow. Thousands of cases could be called into question after this proof of Molfino's falsifications has been revealed.

The heads of the Departments within the DA’s office then typed up and signed this termination recommendation with a detailed description of their findings. I obtained this signed document through an open records request. I have attached this document to this article.

Marcelo Molfino claims he resigned with no issues, and the local news even claimed Molfino resigned with no issues, but that was just simply another lie by Molfino. As the document attached clearly proves, Molfino resigned after he was already set to be fired based on signed findings of termination by the heads of the District Attorney’s office. To report anything other than that is deceiving the public about a public servant who way lying and stealing and fired for it. Resignation in lieu of termination or a forced resignation is legally considered being fired.

This ends a half-decade saga, and vindicates me, David Bellow. I originally blew the whistle on Marcelo Molfino wage theft several years ago when I discovered that he was fraudulently taking comp time that didn’t seem to be earned, so that he could get paid by the taxpayers while he was doing illegal side jobs during his government day shift. The Texas DPS actually determined that Molfino had violated the law by practicing without a license with his side jobs, but the DA, his boss, refused to prosecute and overlooked the county policy violations such as side work not being cleared with the county so that there is no conflict of interest.

Marcelo Molfino then retaliated against me after I blew the whistle him. While still being investigated by the State, Molfino brought bogus charges against me and he himself even wrote, and falsified, the arrest warrant. It was a massive conflict of interest and a clear retaliation to try to shild himself from the criminal probe I initiated against him.? I fought back and all charges were eventually dismissed. The Texas Rangers then brought an investigation against Molfino and the DA’s office for Perjury and Official Oppression against me. They were going to bring charges and even convened a grand jury against the sitting DA office, but Molfino escaped charges due to the statue of limitations having just run out. Marcelo Molfino didn’t learn though. He went right back to using unearned comp time to steal money from the taxpayers.

Earlier this year, I did an open records request, and that is when I uncovered that Molfino finally slipped up in covering his tracks. He put on his time card that he was taking comp time and he listed the date the comp time was earned as a date that he could not have earned comp time because he was already getting taxpayer emergency pay to stay home and not work on that day. Furthermore, that day he said he earned comp time, he was in another city doing a side job that was not even cleared by the county.

That is theft of taxpayer money. I brought my concern to the District Attorney Open Records officer and requested more information and documents. Next thing you know, Marcelo Molfino resigns unexpectedly. Some did not believe what I was saying because Molfino gets involved in the community so as to appear to be an honest man, so I then did an information request for the records. That is what brings us to this article right now, and the attached county document that shows Marcelo Molfino was set to be terminated for the very same things I had turned him in for several years ago. The disbelief can be laid to rest. The documents show that this man who presented himself as honest was actually using his power and position to steal taxpayer money and retaliate against those who challenged him.

A community has been freed from a corrupt investigator who had intentionally used his power to oppress dozens of people over the years. One black man, Omar Daw, even spent 3 years in jail until the US Attorney released him based on Marcelo Molfino having been involved with an informant planting a gun in the Omar’s car. Molfino would frequently get parents in child custody family court cases to hire him and pay him money, and Molfino would then turn around and bring some criminal charge involving the ex of the person who paid him, which would give a leg up in family courts to the person who Paid Molfino. Molfino even testified under oath to getting paid $1500 cash from my ex-wife, Courtney Hudson. It was a family court, criminal enterprise run by Molfino and nothing short of bribery and public corruption. That is how I first came to know Molfino when my ex-wife, who admitted to being violent with me and leaving our one year old son in cars in parking lots, hired him because she was wanting to keep me from seeing my son even though I was by all accounts an amazing loving and involved father who has never even been accused of not being a good father. Molfino tried to go after me, but I fought back and dug for the truth, and now I am happy to say that I have been vindicated. The false charges Molfino brought against me have long been dismissed, but now I can finally show that what I was saying all along about Molfino was true now that Marcelo Molfino’s own department heads determined he lied and was unfit to be an officer.

This chapter of corruption in Jefferson County is finally coming to a close. 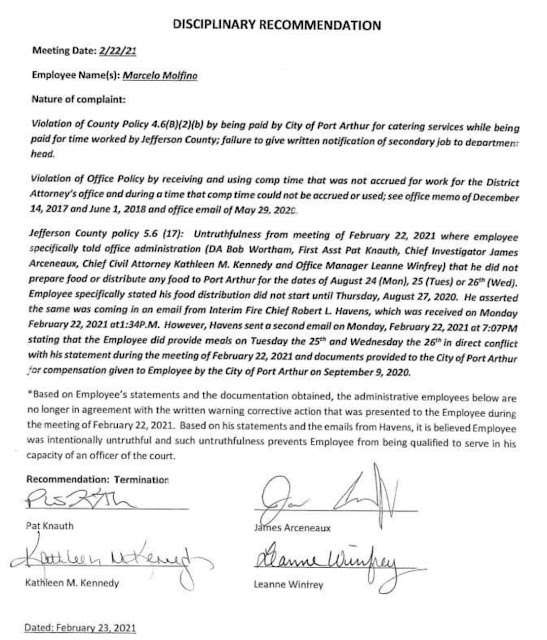 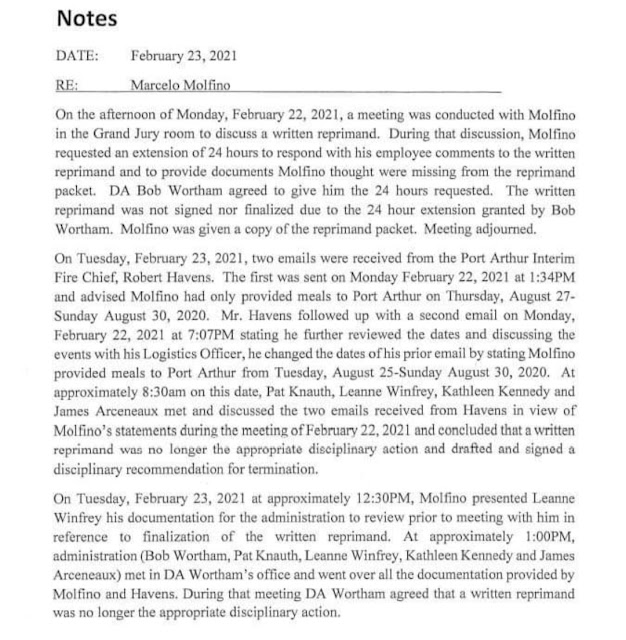 Posted by David Bellow Posted at 10:38 AM